Gymnast Simone Biles received a hero’s welcome as she arrived home in Texas after a troubled Olympics in Tokyo, which saw her forced to pull out of five event finals over struggles with her mental health.

The 24-year-old had a very rocky road at this year’s Games, having gone into the competition expected to repeat, if not improve upon, the five-medal haul she brought home from Rio in 2016,

however she left Japan with two medals in hand: a silver from the team final and a bronze on the balance beam.

But despite the controversy that erupted on social media over her decision to withdraw from several events – which saw many praise the gymnast, while others accused her of ‘quitting’ and ‘abandoning’ her team – Biles put her troubles behind her as she returned home to Houston, where she was greeted by a parade of fans waiting to celebrate her achievements.

After touching down in Houston, where she enjoyed a tearful reunion with her parents, Nellie and Ronald, Biles was driven home by her father in the back of her Tiffany-blue Range Rover convertible, from which she waved and smiled at the dozens of fans who gathered on the side of the road to catch a glimpse of the gymnast.

Wearing a pair of Ray-Ban sunglasses, a white Olympics T-shirt, and a pair of black leggings, Biles looked every inch the A-lister as she beamed with delight while greeting her supporters, many of whom brandished banners and signs of support for the sporting star. 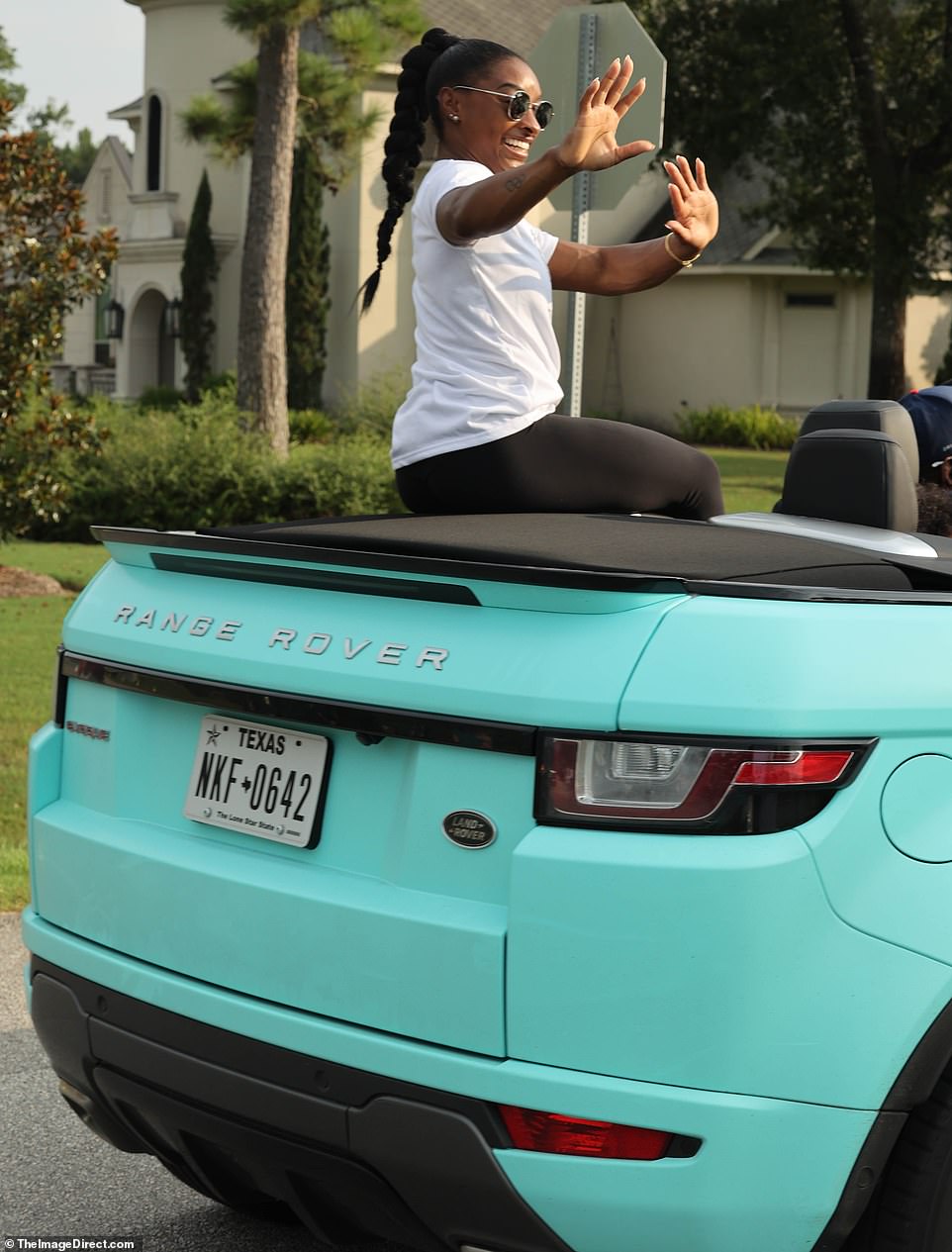 Having weathered a difficult time in Tokyo, Biles looked thrilled to put everything behind her, grinning with joy as she made her way home, with dad Ron behind the wheel of her colorful car, while mom Nellie sat in the backseat beside her daughter. 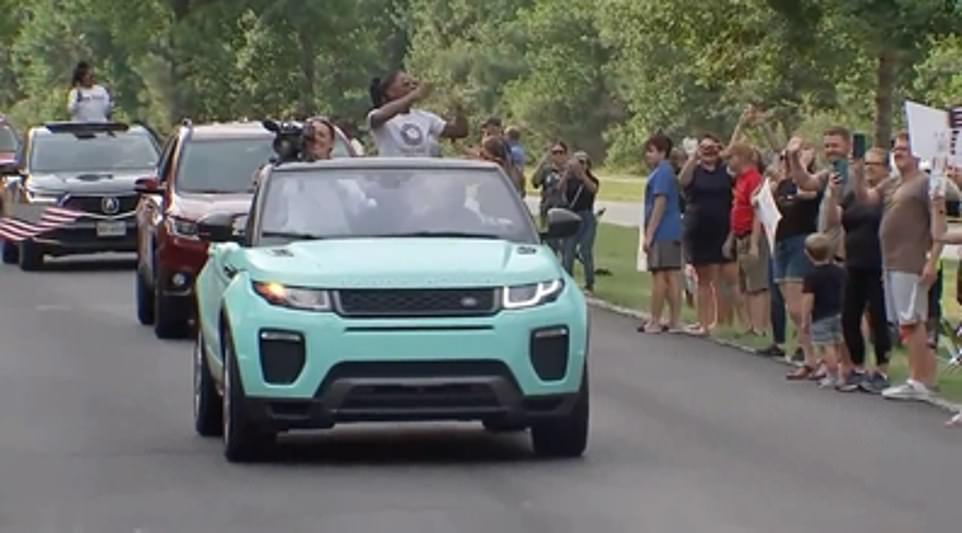 Shortly after arriving home, Biles took to social media to celebrate her arrival, posing a Boomerang video of herself looking comfortable and cozy while posing in a mirror inside her sprawling Texas mansion.

Wearing a simple black crop top and leggings, Biles kept two reminders of her Olympian status, wearing a silver necklace with the Olympic rings, while also showing off the same design that she had tattooed on her arm after the 2016 Games in Rio. 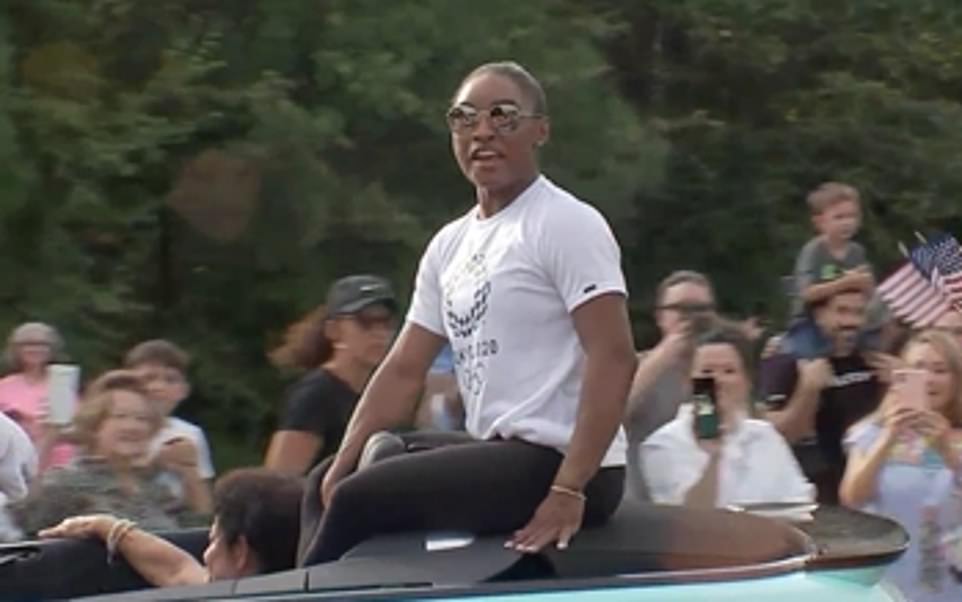 Although she had been away from home for several weeks, having arrived in Tokyo in mid-July in order to begin training with the other Team USA gymnasts, Biles didn’t wait long before hitting the road once again – this time in order to reunite with her NFL star boyfriend Jonathan Owens, who has been busy at pre-season training for the Houston Texans while his girlfriend competed in Tokyo. 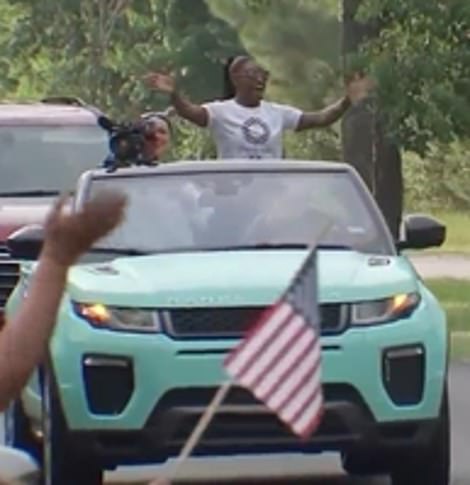 Biles shared several clips from the side of the field as she watched the football star train on her Instagram Stories, before posting a sweet video of the two together for the first time in several weeks.

During his girlfriend’s time in Tokyo, Owens regularly voiced his support for her on social media, where he posted several gushing tributes to the gymnast – while also taking a thinly-veiled swipe at her critics by sharing a quote from baseball legend Babe Ruth about ‘the loudest boos coming from the cheapest seats’. 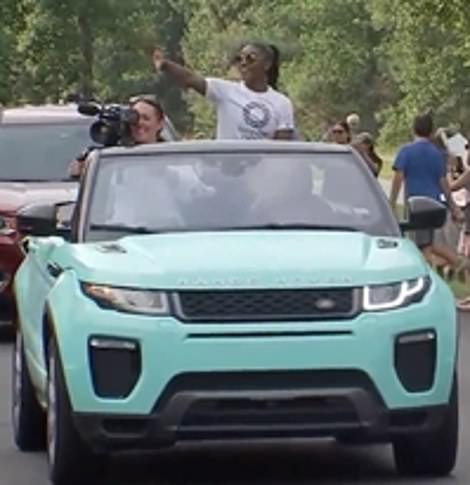 Following her bronze medal win on the balance beam – which was the first final Biles competed in after making the shock decision to withdraw from the team event following a grave error on her first rotation – Owens expressed his ‘pride’ at seeing her back on the podium.

‘Words can’t express how proud of you I am right now,’ Owens wrote, while sharing a picture of Biles beaming with pride after completing her beam routine inside the Ariake Gymnastics Center in Tokyo.