One can expect to see a lot of strange creatures in the sea while fishing. But sometimes fishing crew comes across such catch which they themselves were not prepared.Like Alabama, the fishing crew was fully taken aback by what they saw. It was an unexpected catch. Their fishing trip to the Gulf Of Mexico near Perdido Pass turned into a rescue mission when they saw a little kitten struggling to stay afloat in the water.

They were just the right people at the right time. They became real heroes by saving a kitten’s life.No one actually knew how the kitten got there, as cats hate water and baths. Fortunately, the kitten escaped drowning or becoming an easy snack for sea animals, and it found a comfortable place as a home.

As the charter boat made a trip to the Gulf of Mexico, Still Flyin Charters’s crew saw an animal that they had never expected to see in the water. On seeing it first, they thought that it was a sea turtle but soon realized that it was a kitten. They saved the kitten and brought it on the boat. 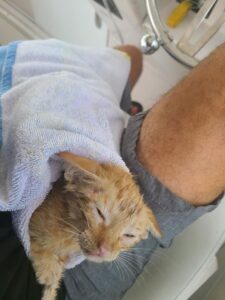 According to Steve Crews, owner, and operator of Still Flyin Charters, they were fishing outside Perdido Pass when he saw something struggling to stay up. Then they immediately pulled in their lines and maneuvered over to it. They used a dip net for bait to pick the kitten up.

The kitten looked afraid and shocked. The whole crew wanted to keep him safe until they reached the shore. He was shaken and took time to come to terms.

Still, Flyin Charters shared the story on Facebook. People commented that the kitten might have been gotten rid of by some heartless owner or may be used as shark bait but the crew thought it might have got caught in the tide.

None of the stories can be proven. But we are happy that it has a happy ending. Upon reaching the shore, the kitty went home with Steve Crews. But they later found a permanent house for the kitty and he is still getting used to it.