Mothers will do anything for their young, across the animal kingdom. Case in point being the mama cat who risked her life trying to save her kittens from a deadly fire.

“This beautiful mama is a hero,” Furget Me Not Animal Rescue wrote on Facebook. “When the barn she called home caught fire, she repeatedly went back into the flames to try to save her babies.”

Tragically, only one kitten would survive the deadly blaze, which left the mother cat suffering from smoke inhalation and covered in painful burns. Nor was the barn’s owner able to provide the cats with medical care, leaving the mama cat struggling to nurse her surviving kitten despite her agonizing pain.

Fortunately, the tiny family wound up at Furget Me Not Animal Rescue, a foster-based cat rescue based in Alberta, Canada.

The Edmonton rescue was already full, but quickly made room for the wounded mother cat and her kitten after hearing about their tragic ordeal.

“We are way over capacity with kittens right now, but when we were alerted to a very emergency situation with a cat in excruciating pain & unable to care for her baby, of course we said yes,” rescuers wrote on Facebook.

Mother and kitten were rushed to the animal hospital, where the injured mama cat was given antibiotics, sedation, and emergency treatment to heal her extensive wounds–-including burns to her belly, ears, and paws — and ease her “unfathomable pain.” The cat also received X-rays to gauge the depth of her smoke inhalation.

“Over the next few weeks, we’ll continue to provide her with multiple medications & salves for her burns every 8hrs, while her ears and the pads of her paws fall off,” rescuers explained. “Mommy is semi-feral, so rescue mummy sure has her work cut out for her, but kitties like this are exactly why we do the work we do.”

Once mother and kitten are fully recovered, the rescue will spay/neuter, vaccinate, and chip both cats so they can get adopted. In the meantime, Furget Me Not Animal Rescue is seeking donations from anyone willing to help fund the feline family’s rehabilitation. 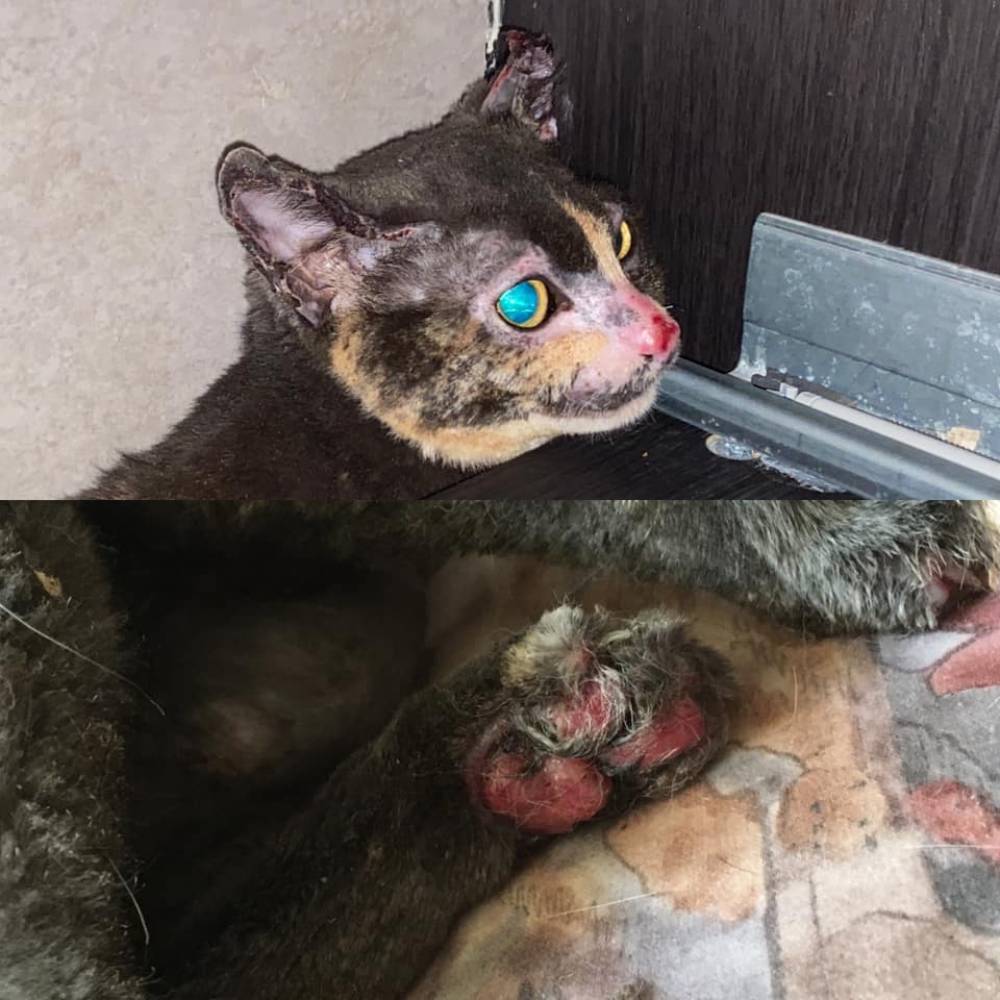 PHOTO: FACEBOOK/FURGET ME NOT ANIMAL RESCUE

“Without your support, we couldn’t help kitties like these,” rescuers pleaded. “If you would be willing to share this post to help us reach as many animal lovers as possible, we would be eternally grateful!”