A Jack Russell named Chloe licks the face of her friend, Eden the cheetah, in a video posted in 2014 The best friends are both based at the Cheetah Experience in Bloemfontein, South Africa.

Chloe the rescue dog was just five years old when she met Eden, a then-14-month-old cheetah during a morning walk.

Both animals are best friends are based at the Cheetah Experience in Bloemfontein, South Africa.

The pair spend hours together playing, nuzzling and cleaning one another. Although they live in separate areas of the park, the duo is reunited whenever the cheetahs are let into the big camp. 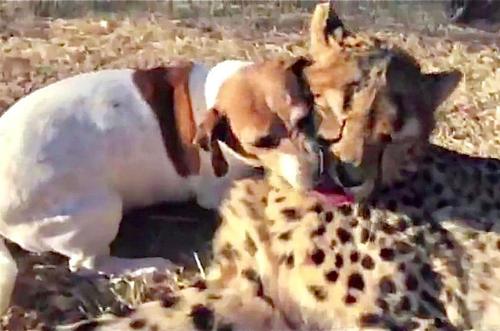 And while they may seem like an unlikely pairing, this little and large-style friendship seems set to go from strength to strength.

According to National Geographic, a cheetah-dog friendship is more common than one might think. Raising puppies and cheetah kittens together helps refocus the big cats’ nervous energy. 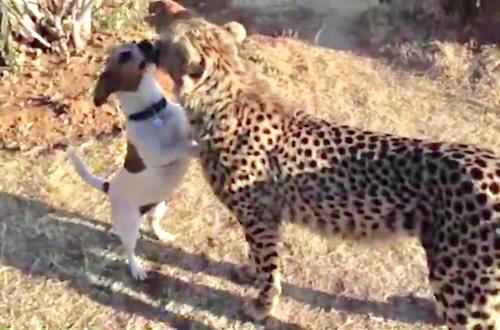 “Male cheetahs can be solitary and territorial, but often they’ll group together with other males for support. Importantly, cheetahs in captivity can be easily agitated,” writes Jennifer S. Holland. 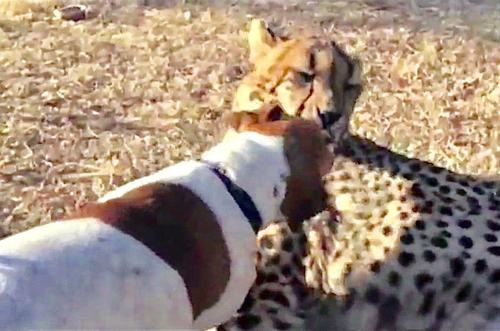 “Built for flight rather than fight, as they grow older the cats are always on edge—eyes out for lurking predators—and ready to leap into action with incredible bursts of speed. In a zoo setting, such nervous energy has nowhere to go.”

Inspired by the success of this phenomenon at the San Diego Zoo, a number of other zoos have recently begun raising puppies and cheetah kittens together to help combat the big cats’ stress and focus their wild energy.