Working from home amid a global pandemic is a big adjustment for many people. Especially those who find themselves working with pets who refuse to respect working hours, social distancing, and personal space.

For instance, when Indiana meteorologist Jeff Lyons was forced to start predicting the weather from his dining room, the weatherman quickly found that his cat, Betty, insisted on being part of the show.

Since making her local news debut in April, the 10-year-old cat has already demonstrated her widespread fan appeal. “People all over the world are watching this crazy cat betty,” Lyons announced during a recent broadcast. Within days, Betty the cat had gone viral.

Betty’s soaring appeal even inspired the station to create an official “Betty the Weather Cat” tracker,

which found that episodes featuring Betty had been viewed in almost every U.S. state and even other countries, including England, Spain, Australia.

The feline’s growing fame has even led Lyon to joke the cat might be out for his job, a sentiment echoed by many people on his Facebook page. “Watch out Jeff!” one user wrote. “She is already taking over the spotlight!”

Other commenters admitted that they didn’t even know where Lyons was based, but enjoyed watching his segment to see Betty’s cute antics. 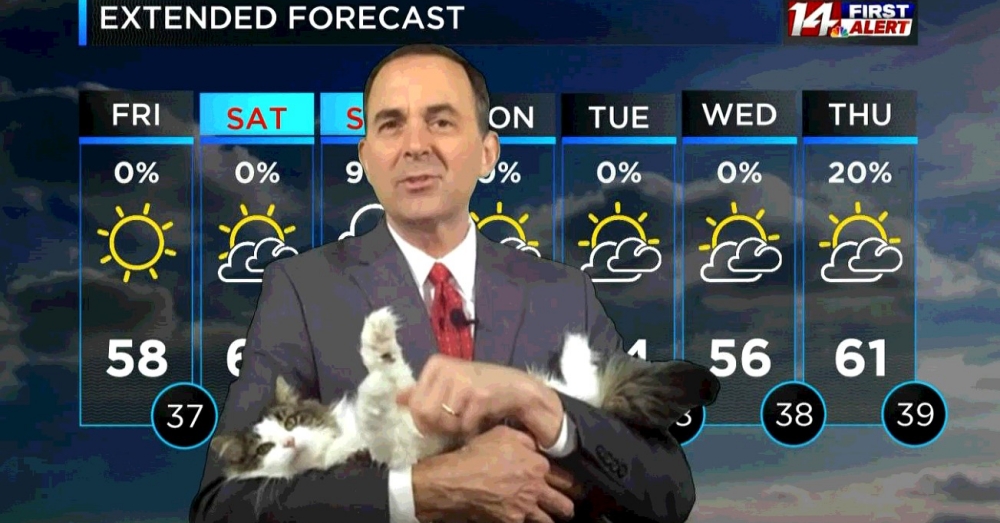 “I didn’t even need to see the weather since I live in Guatemala, but you’ve won my attention and my heart!” another user wrote.

By now, the weatherman has come to terms with the fact that he’s been upstaged by his celebrity feline, and adjusted his segments accordingly. “You’re tuning in to watch the cat, I realize that,” Lyons said in a recent broadcast, “but it’s going to be cold tonight.”