Last June, I saw a post on Facebook about an abused poodle mix puppy who had been found with a rubber band around his muzzle. The pictures were so graphic and horrible that I couldn’t stand to look at them. I quickly scrolled away without sharing or commenting.

A few days later I saw him again during his recovery from surgery. He looked better but still pretty battered, with 2 layers of stitches surrounding his muzzle.

The news story was encouraging, saying that over 150 people were interested in adopting him. I was happy that so many people wanted him, so I “liked” the post and moved on yet again.. no intention of adopting a dog myself. We had lost our 14 year old Min-Pin in February from congestive heart failure and still had a 15 year old Chihuahua at home, so our plan was not to get another dog until our little senior citizen went over the rainbow bridge to be with her sister.

Fast forward 2 more days and I get a text from my vet tech friend who works at the vet office that did the surgery. She asked if I had heard about “the puppy with the rubber band” and I said yes. 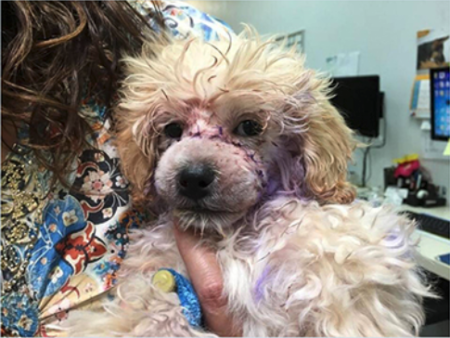 She said that all of them at the vet wanted us to have him. I told her I was flattered but we really didn’t want a puppy at that time, and I was positive my husband would be completely against it. She said, “will you just meet him?” 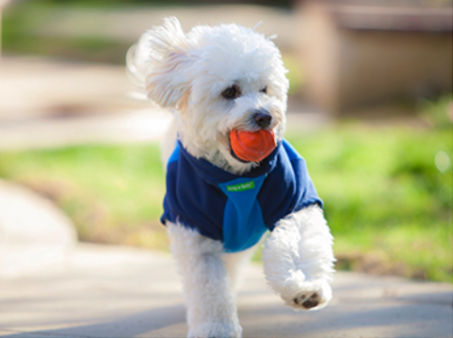 Well, the rest is history! She brought him over the day he got his stitches out and it took my husband and I about a minute and a half to decide he was our baby.

He was different than we imagined out next dog would be, for one thing he was a boy.. and long haired.. and didn’t fit through our dog door. But we fell and we fell hard!

Its 8 months later and he is a constant source of joy in our lives. We honestly believe it was just meant to be.