Toddlers are cute, curious, and – because they also love pushing boundaries – often getting into trouble. But when one Chinese toddler got yelled at for ruining her mom’s face cream, her loyal dog rushed to the little girl’s defense.

The adorable video — which was posted on Douyin, China’s version of TikTok — shows the golden retriever rushing to comfort the toddler.

But the 5-year-old dog, Harry Potter, is also a loyal guard dog. In addition to comforting the child, the dog also steps in front of the girl and protectively growls at her mom in a gentle warning to back off.

Apparently, this isn’t the first time Harry has come to the little girl’s defense. “You, get up. Stop protecting [her],’ the frustrated mother tells the dog [in Mandarin] at one point, according to the Daily MailOnline. But the pup refuses to abandon his little charge.

As the girl continues to cry, the dog adorably leans his head on the baby’s shoulder and even uses one paw to wrap her up in a hug. All the while, Harry Potter keeps a watchful eye on the girl’s mother, just in case she flies into another fit of rage.

“I was honestly really upset. I’d just bought the cream and half of it was already gone,” the toddler’s 32-year-old mother, Ms. Sun, the Daily MailOnline after this incident went viral.

‘My baby started crying because I was shouting at her quite aggressively.”

But in the end, the situation was diffused by the dog’s adorable antics. “I was still upset but I thought it was also quite funny,” Ms. Sun said. “It was very heart-warming. Dogs would find ways to express their love if you treat them properly.” 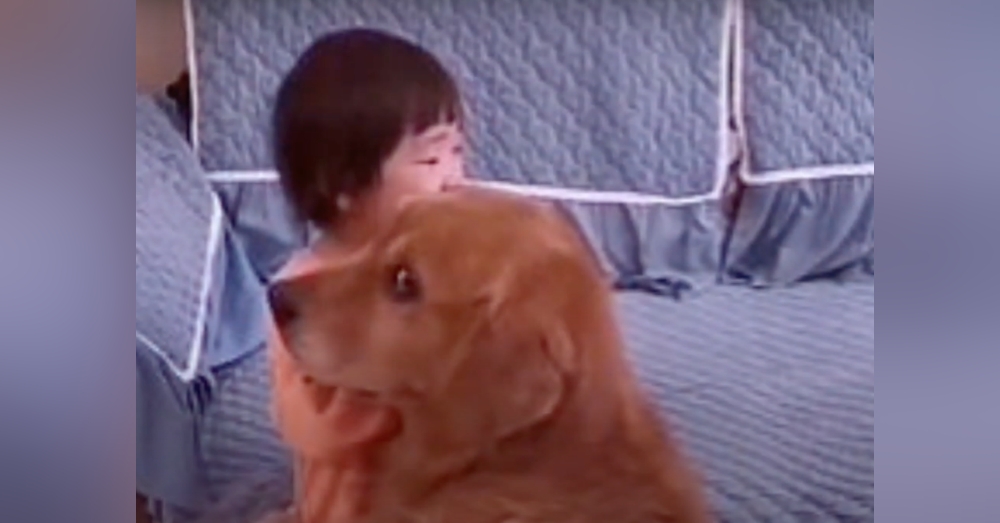 According to Ms. Sun, Harry Potter the dog is the embodiment of canine loyalty. “Whenever we speak to [the little girl] in a harsh tone, he would come over and try to shield her with his paws,” she said. “He would protect the child with his life.”