There is no way to tell for sure how a dog will react to a new baby. Because of this, the situation can often cause a fair amount of anxiety and it’s also important to take precautions to keep everyone safe in case something doesn’t go the way that you were hoping.

While some dogs immediately take to a new baby, some may ignore them completely or even become jealous that this new little creature is taking up so much of their owner’s love and attention. Fortunately, most dogs end up growing to accept and even love the new addition when given enough time. 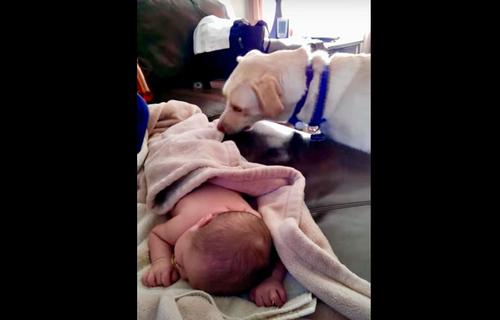 In one case, a sweet pooch ended up falling in love with his new human brother, and their adorable interaction was captured in a YouTube video that has been shared across the world.

While the baby may only have been a few months old, it’s easy to see the special bond that is shared between him and his pup. YouTube user baywatch106ify uploaded the “aww”-inspiring video to his channel, showing a loving Labrador covering the sleeping child with his baby blanket by gently nudging it onto him. It even looks like the pup tried to keep him even safer by tucking him in with his nose! 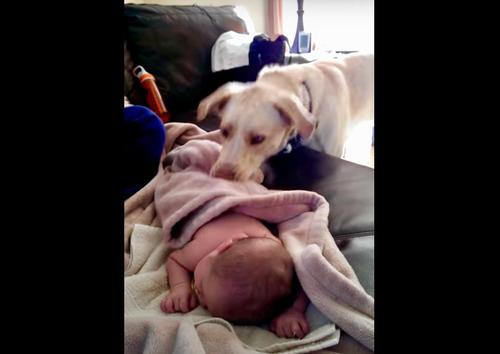 After tucking in his new young friend, the Labrador pup stretches out and looks at his little brother. It’s almost like he’s letting him know how tiring being a big brother can be! Users everywhere began gushing in the comments about what a good boy the pup was for taking care of his little human friend:

“That dog wasn’t just covering the baby he was tucking in the blanket ether to keep the baby warmer or from rolling off,” pointed out one user. Another exclaimed, “The covering along with the “tucking in” with the nose … dang I love dogs!” 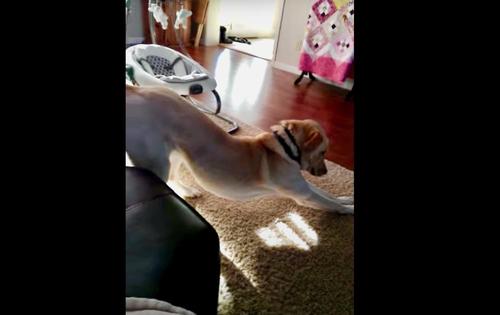 As with most popular YouTube videos, some users insisted that these positive observations were all wrong as they thought the dog was just trying to bury his little brother like a bone. Other users were quick to point out just how smart dogs are and that he was probably trying to copy behavior he had seen from his owners.

This pooch isn’t alone when it comes to having a special bond as Bronn the dog and baby Liam were caught playing together in a video so cute that it made headlines! As Bronn jumps around, his human brother bursts out in adorable laughter. When Bron sees himself on TV, he gets so excited that he starts jumping for joy. The bond that animals and humans share is something that exists no matter what age we are and it will always be something special.