When John Weston received the heartbreaking diagnosis that he only had 6 months left to live his neighbor made a suggestion that took his life in a more meaningful direction.

John Weston was in the end stages of ALS – a progressive nervous system disease that affects nerve cells in the brain and spinal cord.

His neighbor and founder of Muttville Senior Dog Rescue Sherri Franklin suggested he get a dog and was introduced to PawPaw – a wolfhound mix.

Not only did PawPaw provide the perfect companion for John but instead of living another 6 months Jon survived another three and a half years – which many believe was largely due to PawPaw.

The two were inseparable. The rescue wrote: “PawPaw is always next to John and he sleeps on his dog bed right next to John’s bed. We all agree that PawPaw has extended John’s life and improved his quality of life too!” 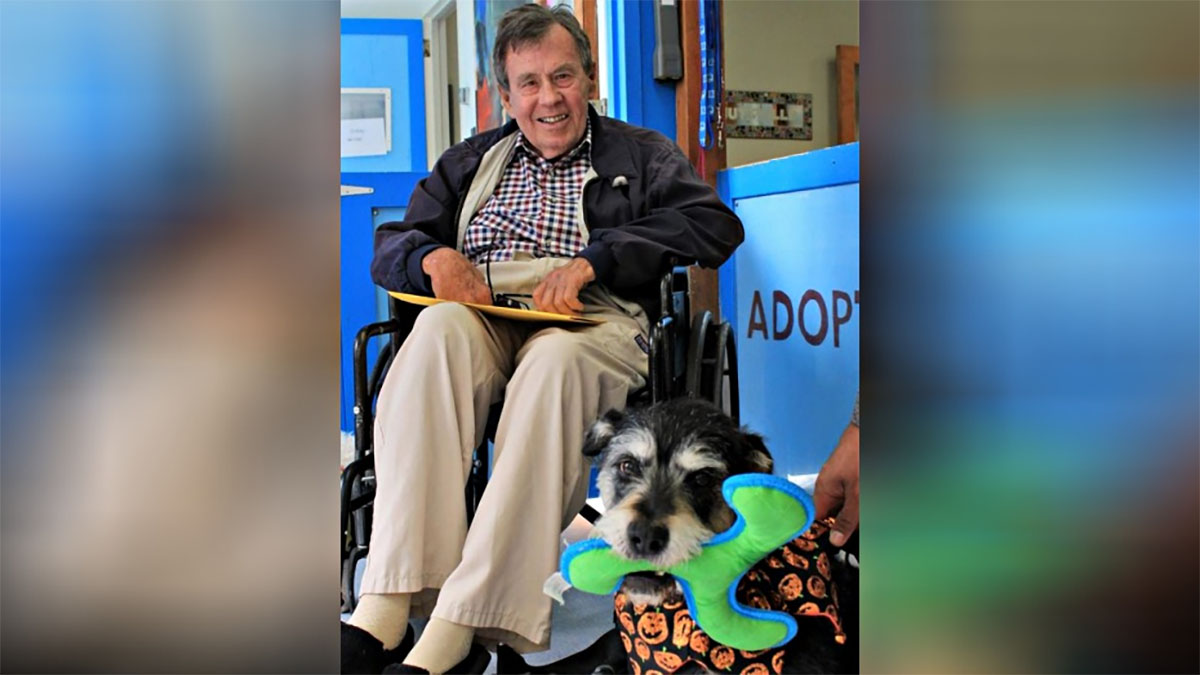 As John was already in a wheelchair he was concerned about what would happen to PawPaw after he died so neighbor Sherri promised to find him a new owner.

When the time came John reached out to Sherri to tell her he wanted to find a new home for PawPaw in the spring of 2019.

John wanted to meet the potential adopters to make sure they were a good fit for his four-legged friend and the rescue agreed that PawPaw would stay with John at his home in San Francisco until he passed.

In a beautiful video put together by Muttville Senior Dog Rescue, to help find the best home for PawPaw, John said: “I’m looking for a home that will love him as much as I did…and do. And he’ll love back, because that’s just his nature.”

Bernie Knobbe and Tim Belavich from Los Angeles, who have already rescued three seniors from Muttville, heard about PawPaw and wanted to meet him.

‘It was obviously meant to be’
John had met many potential adopters of PawPaw but there was something different when PawPaw met Bernie. It seems the two had an instant connection and John knew this was the one for PawPaw.

John observed the two playing and called Bernie over to his bed and removed his oxygen tube to speak. “John put his hand on my arm and he just said, ‘You’re a good guy. This is good,’” Bernie told TODAY. “It was emotional. Everybody was crying in the room. It was obviously meant to be.”

After John told Sherri that Bernie was the perfect match he passed away three days later. Sherri believes he was holding on until he found a forever home for his beloved dog.

“I think he met the right person and he could finally let go,” she said. “John left this world happier.”

The rescue concluded the video by saying: “John, we will miss you. So will Pawpaw. But one thing you can be sure of. Pawpaw is loved.”

The 16-year-old dog now lives in Los Angeles with two other rescue schnauzers and enjoys playing with toys and running around his backyard.

His new family said: “We hope John is watching over PawPaw and us and is happy with how we are caring for him and how he has settled in here in LA since we adopted him in April, 2019.”