Halloween costumes are usually worn only once, but for a rescue dog named Myko, dressing up has become a year-round activity.Wearing his old Halloween costume has helped Myko battle fears he’s had since he was a little puppy — and he looks adorable doing it.From the moment they saw Myko online, Elena and her husband knew he was special.

“He had been rescued from a high-kill shelter in South Carolina, and prior to being at the shelter, there had been some kind of neglect,” Elena, Myko’s mom, who asked her last name not be used, told The Dodo. “When we saw photos of him, it was love at first sight …

His little face on the screen with those enormous brown eyes instantly spoke to both of us, and we knew that we had to rescue him.”Myko has a huge personality and is generally a happy boy, but he’s also very sensitive. Ceiling fans, fireworks, thunder, water and deer in the backyard all tend to freak Myko out.

“We never quite know what we might run into that sets off a fear response,” Elena said. “Despite that, he is incredibly brave, smart and responsive to training — he has accomplished so much and moved beyond many of these challenges.” 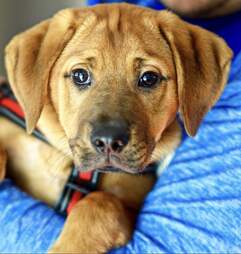 When Myko gets scared, he can bark for long periods of time. Nothing seemed to calm him, so his parents had to get creative and discovered that the answer to their problem had been sitting in their closet the entire time. 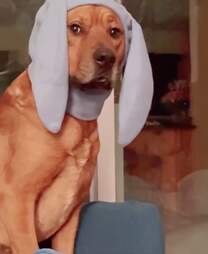 “We had read about how clothing that is form-fitting (like a ThunderShirt) or pressure around their ears can be calming for dogs who are in a high state of arousal,” Elena said. “We had purchased an Eeyore Halloween costume for him a few months back, so we pulled out the droopy ears portion of it. We put them on him and he instantly became very quiet and calm.”

Myko’s old Eeyore costume has since become his “quiet ears,” and he knows exactly what to do when the ears come out. Just seeing the ears reminds Myko that it’s time to relax. And he doesn’t mind wearing them — especially since he usually gets a tasty treat at the same time.

“If he gets a reminder that he will need to wear them, he may just become quiet and then walk away to do something else,” Elena said. “When we pull them out or he sees them, he also may quiet down.”