Pets are very dear to us, especially dogs. There’s a reason they’re called man’s best friend. It’s even clearer just how special the relationship between a human and a dog can be when you see dogs being protective of their owners. But when you see a dog being protective of a small child, this shows the pinnacle of their love for their human family.

One family wanted to document this love between their toddler daughter and their golden retriever. Golden retrievers are known for being kind and gentle dogs, and from the footage they’ve compiled, it’s enough to silence any potential doubters of the breed.

Posted to YouTube on Oct. 20, 2020, the adorable video, which shows how the golden retriever acts kind of like a mother to the little girl, has already amassed over 2.3 million views and over 28,000 likes! And it’s clear to us why — the deeds that the dog does for the little girl are truly a sign of love. 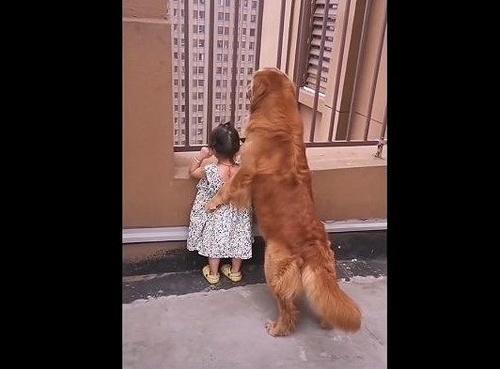 The video begins with the pair watching out from a balcony. Although there are guardrails in place, the dog is standing up on its two back feet and has one paw on the little girl’s back, as if to protect her in case she leans too far over. It’s already a heart-melting start to the video, but believe us, it gets even better.

Soon we see the dog fetching the little girl’s clothes from a closet in one room and bringing them to her in another, allowing her to get dressed. It shows that the dog has clearly been well trained and has no problem grabbing things to help out around the house!

Next comes lunchtime, and the little girl shows how thankful she is for her dog by sharing her food with the pup. Sharing is caring after all! Following that is a nap, during which the golden retriever puts its paw on the little girl’s forehead, patting her for a change. Not content with how she’s sleeping, the dog decides to fetch a blanket and cover the little princess.

There’s even a section where the girl is attempting to cook, although somehow there is more flour on the dog’s nose and head than anywhere else. Ever the good sport, the dog calmly stays by the little girl’s side as it looks like they’re getting up to lots of mischief together!

There are so many adorable moments that the owners even made a second video, which they released in March 2021. They are clearly best friends, as the golden retriever and the little girl are inseparable. And honestly, if we had the option of having a second mom who happens to be a golden retriever, I think it’s clear we’d all say yes!