Children aren’t the only ones who love story time…

A litter of 4-week-old golden retriever puppies from Redlands, California, were captured on video completely enthralled with a storytelling dragon.

The adorable puppies gathered around Dalton the Storytelling Dragon who told the story of ‘Jack and the Beanstalk’. The old English fairy tale about a boy named Jack and his magic beans is just one of the tales Dalton recites.

The animated purple dragon shares five classic fairy tales: Hansel and Gretel, Jack and the Beanstalk, Rapunzel, The Ugly Duckling, and Sleeping Beauty. Dalton moves his mouth and sways his head as he tells the stories, captivating children and puppies.

As the book changed color, a few curious puppies went in for a closer look. Dalton continued with the story saying,

“The magic beans had grown into a tall beanstalk that stretched into the sky.”

One of the ten puppies snuggled into the fluffy lamb toy in the pen and fell asleep listening to the tale.

While some people criticize the old fairy tale for encouraging stealing, the only thing the video is doing is stealing hearts. 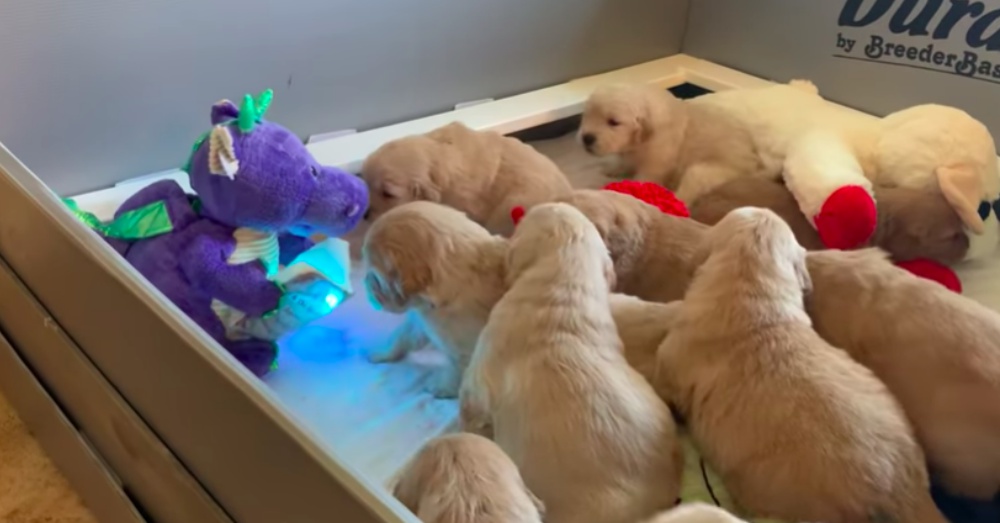 Millions have watched the video and cannot help but smile as the innocent puppies intently listen to the dragon.