Jason Gasparik was driving home from a friend’s house Friday night when he saw something on the side of a busy street that made him pull over.

“I noticed a vehicle stopped on the road and someone was running around in the grass median,” Gasparik told The Dodo. “I then noticed the dog (Roxy) running in circles in the road, confused and scared.”

Gasparik joined in on the chase, but the 70-pound chocolate Lab refused to let her guard down. Soon, a police officer and another concerned driver were lending a hand trying to get the dog to safety. But not even the promise of a treat could tempt the lost pup.

After an hour, Gasparik had a realization: “I noticed she would run after me if I lightly jogged. She was playful but very apprehensive,” he said. “I decided to run around the parking lot nearby and after some laps around, she finally got tired, lay down and I was able to grab her neck scruff.”

Gasparik never thought that he would start his weekend in the waiting room of a 24-hour vet clinic, but when the clock struck midnight, that’s exactly where he was. 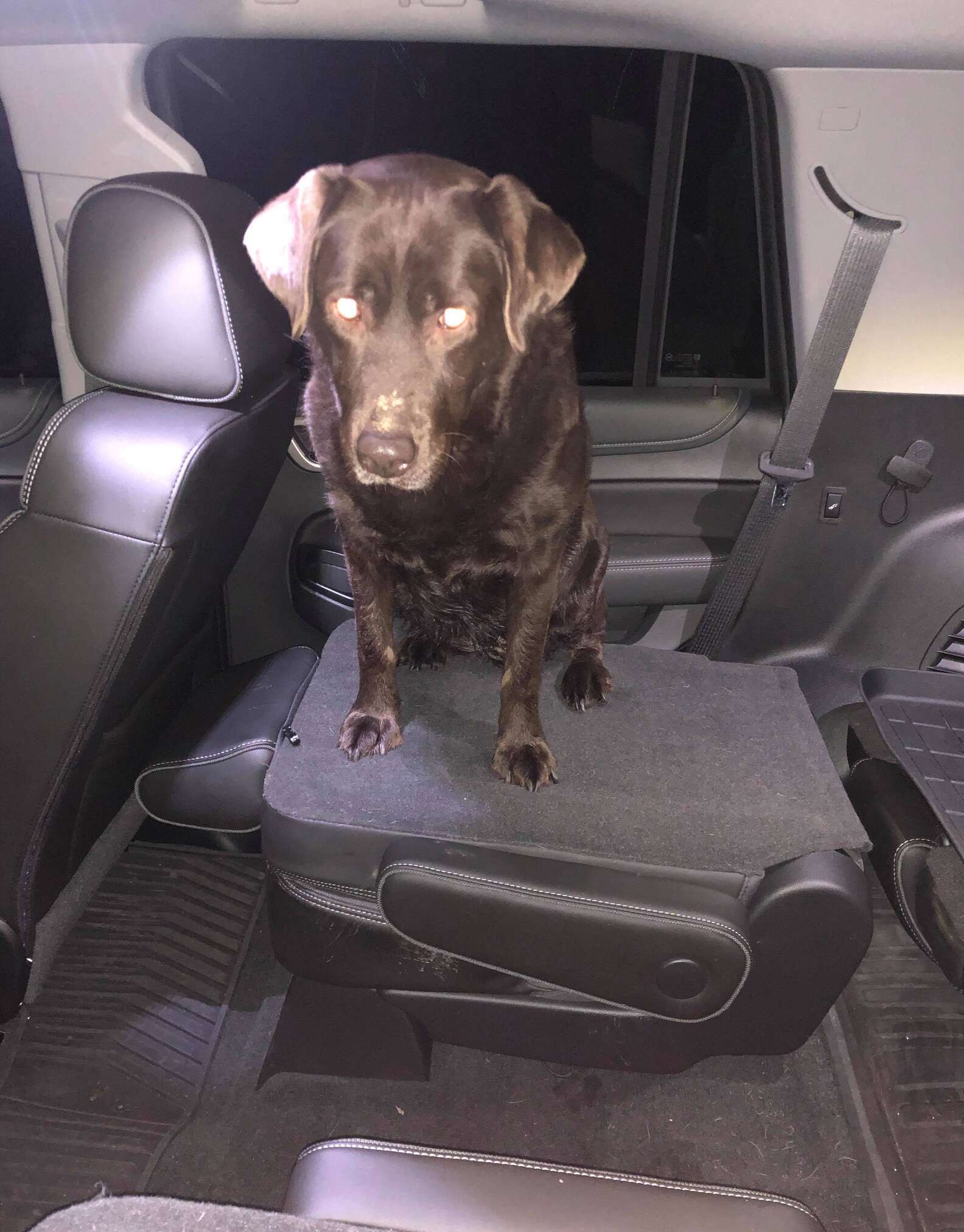 A scan of the lost dog for a microchip came back positive, but the ID number wasn’t registered to an owner. Gasparik knew then that he’d have to get creative if he was going to reunite Roxy with her family. 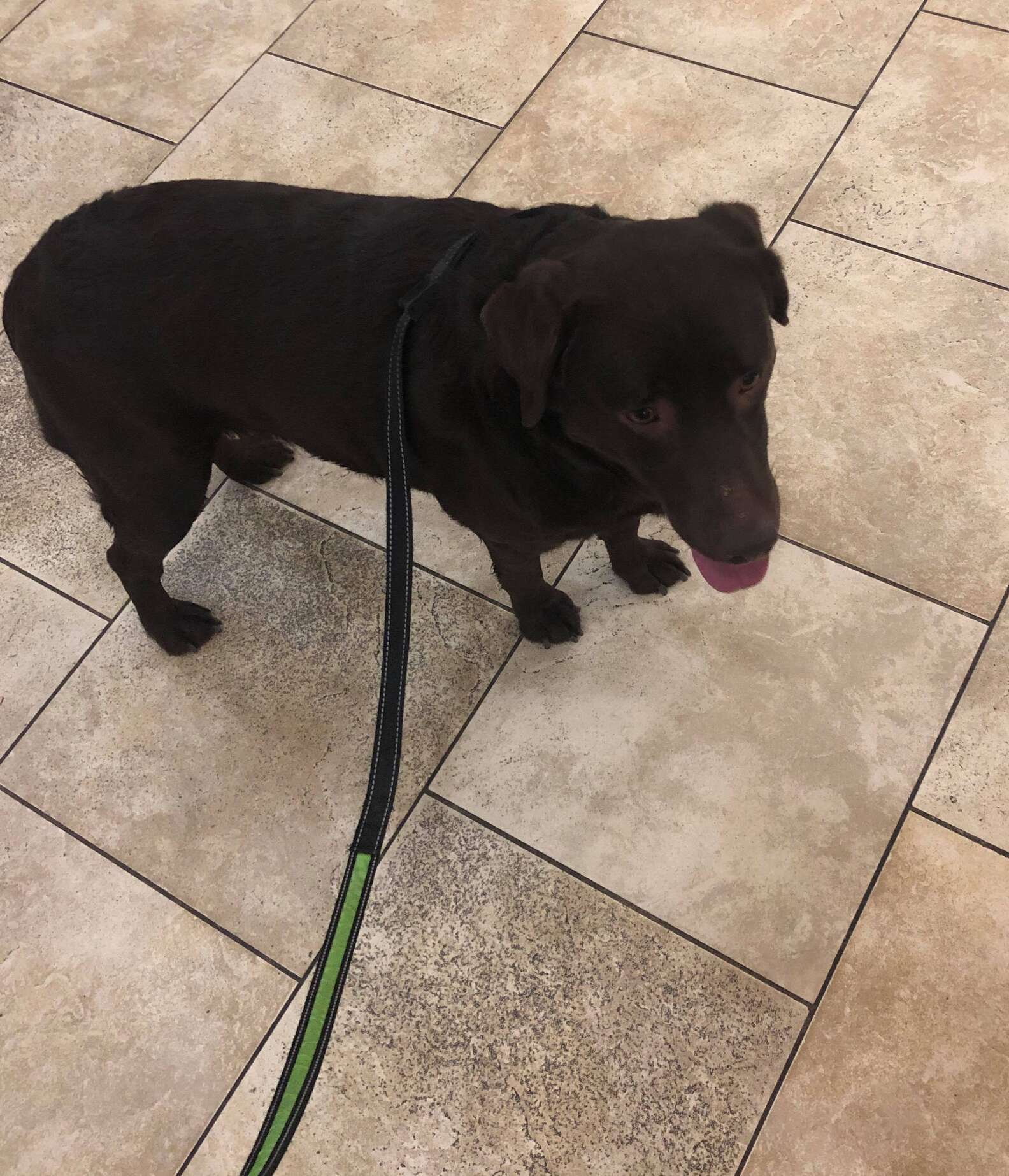 At home, Gasparik drafted a lost dog post on Facebook and used PawBoost, a service that helps expand the reach of Facebook posts and connect with rescue volunteers, to help his message gain traction. Roxy, however, was more concerned with snuggles. “The first night I brought her to my home, she immediately jumped on my bed and landed right on top of me licking my face,” he said. “She was excited but you could tell she was so confused and scared — but happy to be hanging out with me.”

The next morning, he decided to try and find the dog’s owner the old-fashioned way.

“I made my sign with an old moving box and a tiki torch pole and decided to go to the corner [where I found Roxy],” he said.

“Admittedly, I felt like a complete fool when I first got out of my truck and started walking to the corner,” Gasparik added. “I almost turned around because I figured everyone would ignore me thinking I was some scammer just looking for money or something.” 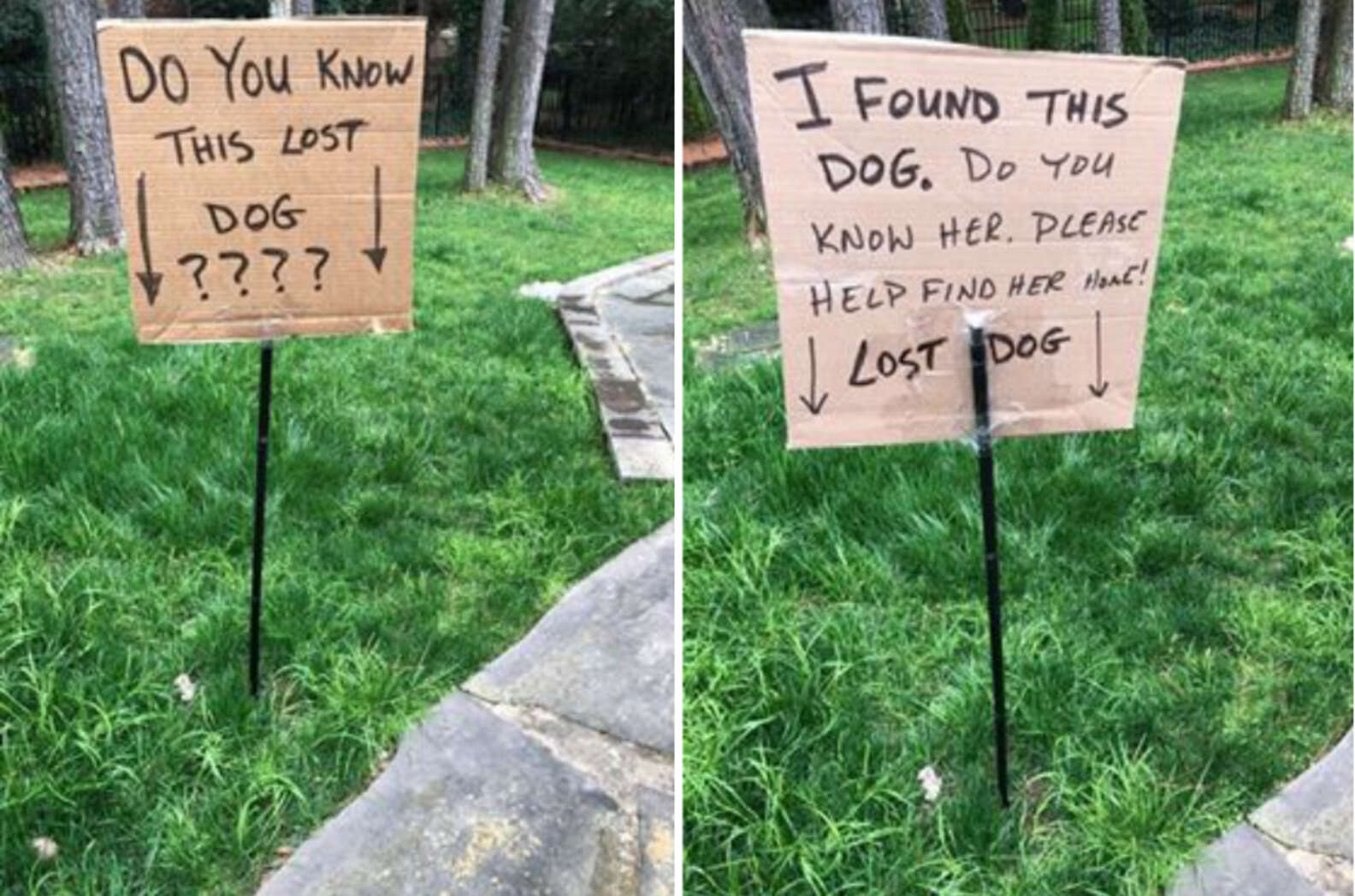 But Gasparik didn’t back down — instead, he tried to attract even more attention by smiling at people and waving. He hoped one of the drivers would recognize Roxy and could point him in the right direction.

As the day went on, people started taking pictures and videos of the stunt, and some cars even pulled over to chat.

“Some were skeptical and wanted to check if I was serious,” he said. “Many of them were asking if we needed food or water or [if there was] anything they could do to help. I just asked them to post on Facebook and Nextdoor [a neighborhood-centric social network] as much as possible to help spread the word.” 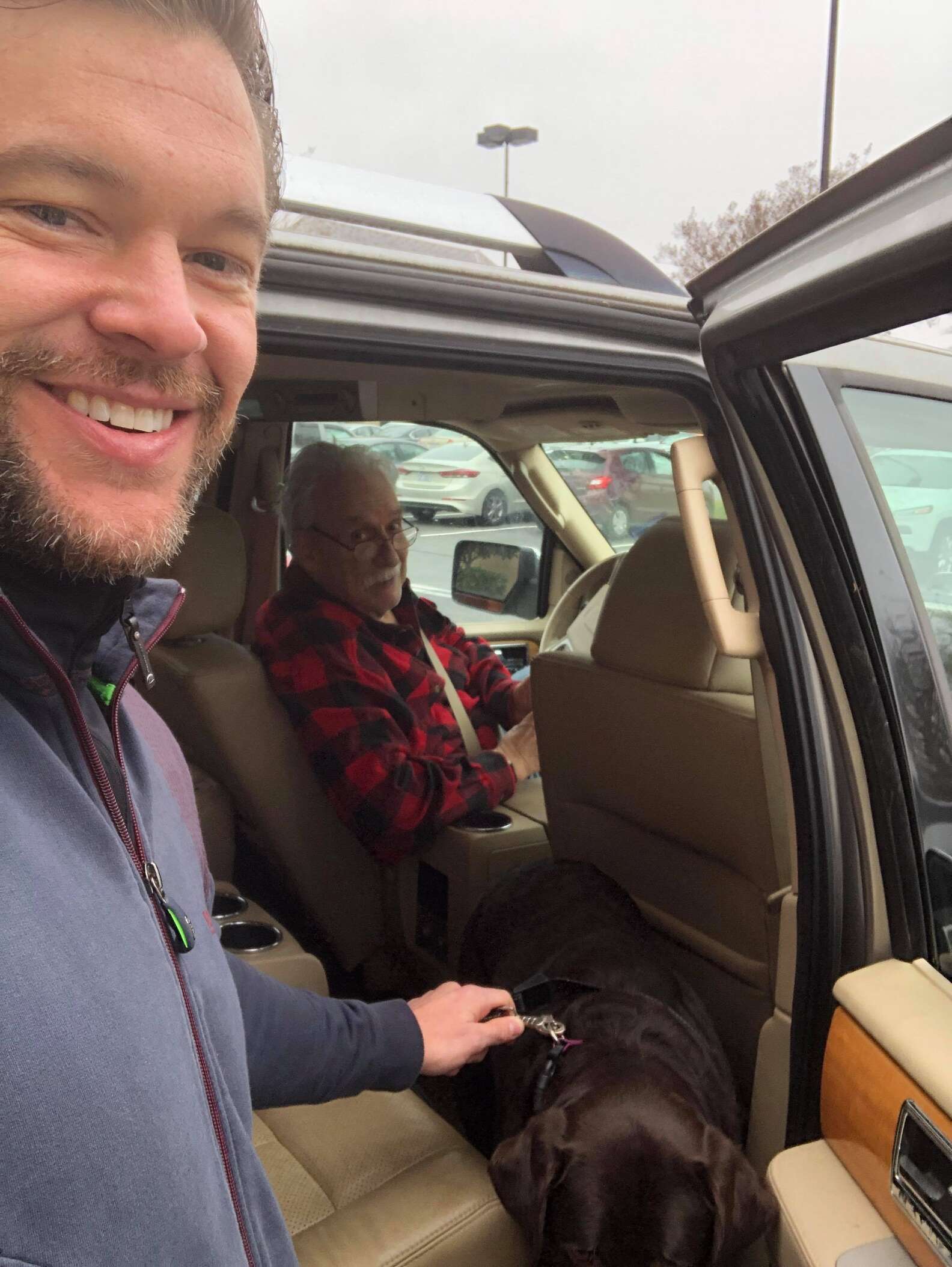 With a business trip set to start on Monday, Gasparik knew he had a limited window of time to reunite Roxy with her owner. So, on Sunday, he and Roxy hit the streets of Charlotte, North Carolina, yet again with the trusty homemade sign.

As it turns out, he didn’t have to stand outside for long. 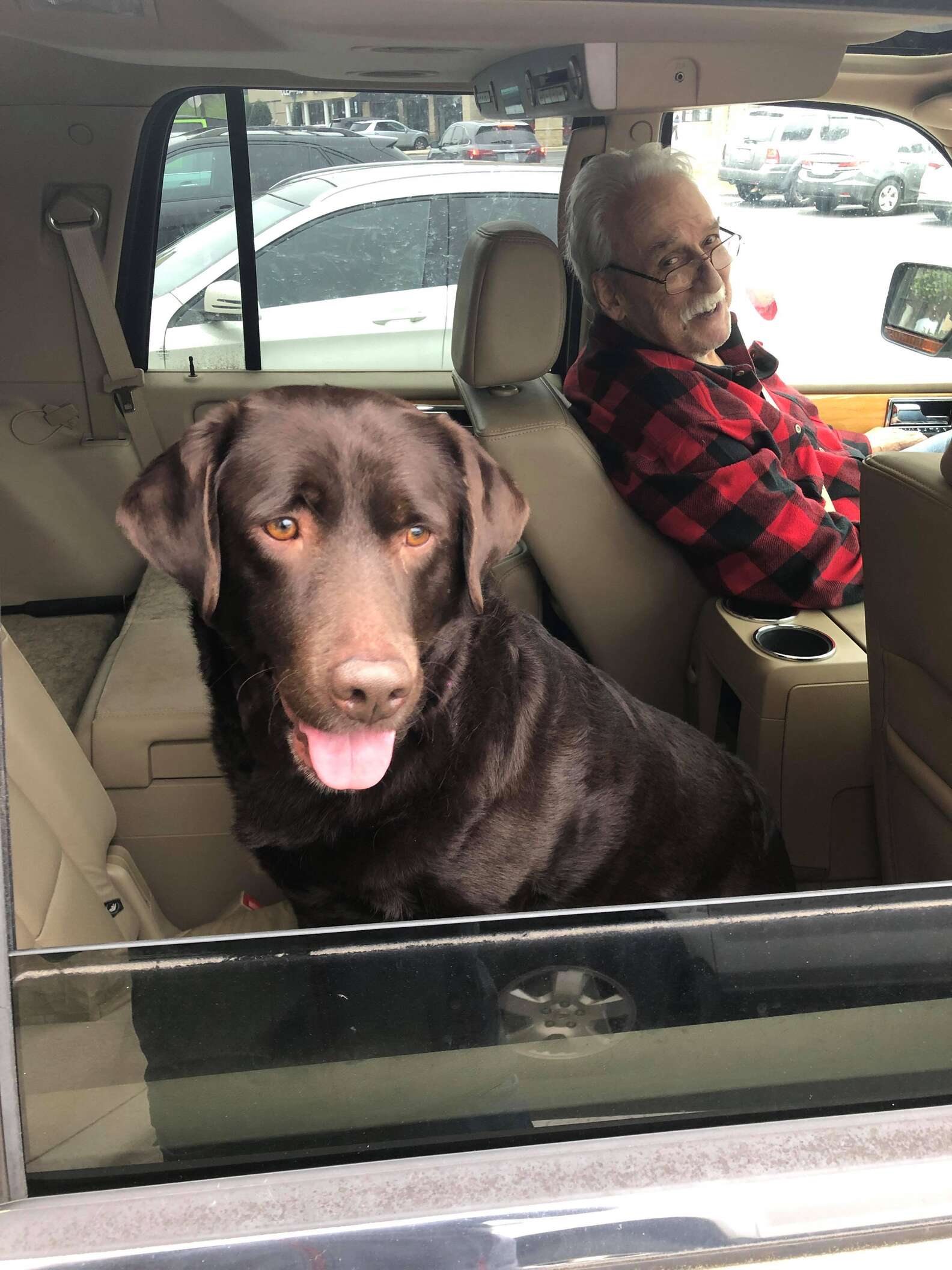 “At 12:30, I was again standing on the corner with my sign and I got a message on Nextdoor from a lady saying she found the owner of Roxy driving around several miles away trying to find her!” he said.

The woman connected Gasparik with Ed, Roxy’s owner, and they scheduled a place to meet. Roxy was clearly ecstatic to be back with her dad.

“As soon as we got near Ed’s truck, Ed shouted ‘Roxy Girl,’ and she was immediately wagging her tail and recognized Ed,” he said. “Roxy was happy to find Ed again.”

Gasparik checked all the paperwork Ed had brought with him and, sure enough, it was a perfect match with the ID number on Roxy’s chip.

If there’s a takeaway, Gasparik said, it’s that he hopes pet owners are inspired to check whether the information on their pets’ microchips is up to date. “I could have returned Roxy two hours after I found her if Ed would have known to register his chip,” he said. “It could have been just that simple.”

All in all, Gasparik is happy that Roxy is back with her dad. It was a perfect ending to a very busy weekend.