The other day, streetcar driver Serhat Topal was transporting passengers along his route in Turkey when he noticed someone on the path ahead.“It was a turtle trying to cross the tracks toward the countryside, but he was stuck,” Topal told The Dodo. “I think he was scared.”

Topal could have continued on his way, leaving the trapped turtle in that perilous spot. But instead, he stopped.After bringing the streetcar to a halt, Topal announced to the passengers the reason for the delay.Topal then disembarked and approached the turtle — lifting him over a barrier fence to continue on his way unhindered.

“The passengers were happy because I helped,” Topal said. But they weren’t the only ones to witness Topal’s kind act.All the while, a security camera was recording as the sweet scene unfolded:“The turtle looked healthy,” Topal said. “He walked away, escaping being crushed [by another streetcar]. I am very happy.” 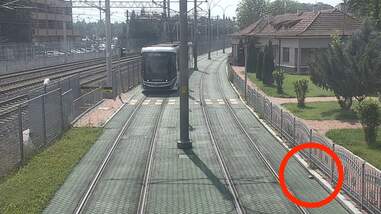 Topal had saved his life.

The kindhearted streetcar driver wasn’t out for attention for himself, but as word spreads about his rescuing of the turtle, he hopes it might inspire others to help where they can.

“All living things are our friends, and we should approach them with love,” Topal said. “Everyone should consider this their duty. I have simply done my duty.”