Shelter homes are filled with numerous animals who are adopted every year. Many animals are easily adopted but for some animals, it takes a long time. They have to wait endlessly to get adopted.For some animals, this wait never ends and days change into weeks, weeks changes into months and years. They continue to wonder when they will find a forever home.

But it does not mean that they should lose hope because every animal is special and all deserve to be happy in their forever home. At times, it is just luck and nothing else because all dogs are very sweet. 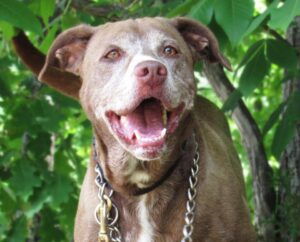 Here is the story of Ginger, the dog who had an abusive past which made her ‘medical, emotional, and behavioral weak, in a sense that she is unadoptable.

But the staff at the shelter worked hard to address those issues and now she is adaptable.

In order to end the wait of the dog, the shelter has come with a way to help the dog find a house. They are sharing a heartbreaking photo of the dog that tells her whole story. The dog is a Labrador retriever mix and it is at Dogwood Animal Shelter located in Lake of the Ozarks in Osage Beach, Missouri.

She is a very good dog and she likes to play. She has been waiting for nearly 8 years for a forever home. Other dogs get adopted but she is waiting behind bars for the house.

The viral photo of the dog shows that she is very sad and outside her kennel is written some lines that tell her story. It reads that her name is Ginger and she has been waiting there for 7 years, 9 months, 2 weeks and 2 days. In it, she even promised to say that she is a good girl and she just needs a second chance. Even Mission-Driven which is a clothing brand, working for shelter pets, shared her image on their social media platform.

Her photo touched many hearts and it became viral. After some days, the shelter started receiving the adoption applications. One of the applicants was Beth from St Louis County.

And finally, the long wait for Ginger was over and she was adopted by Beth. Beth actually felt that she had been rescued by Ginger. Both of them are happy together.