One of the kindest humans imaginable had to make a difficult phone call. He called Hope For Paws and told them about two homeless Pit Bulls he had been caring for near his home.

He couldn’t adopt them himself because he had a little dog already and he was too afraid they wouldn’t do well together.

The male Pit Bull is afraid of humans and it took him a long time to trust the kind man.

As the rescuers arrive from Hope For Paws and the Good Samaritan led them to the dogs, the female comes forward, right towards them, and happily greets her new friends. She eats her snack and wags her tail. 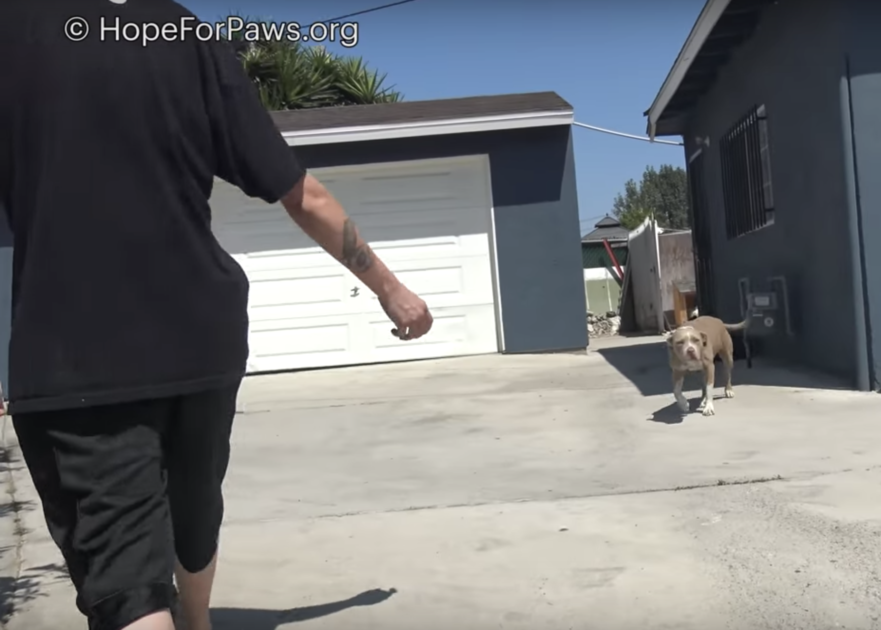 The male dog hangs out in the background. He’s curious but very scared. The kind human explains the situation further.

He loves the two dogs, the rescue later names ‘George and Irene.’ He wanted to bring them home with him so badly. In fact, he feels because the male dog has such a hard time with people and only trusts him, he’s betraying him by allowing the rescue to take him. 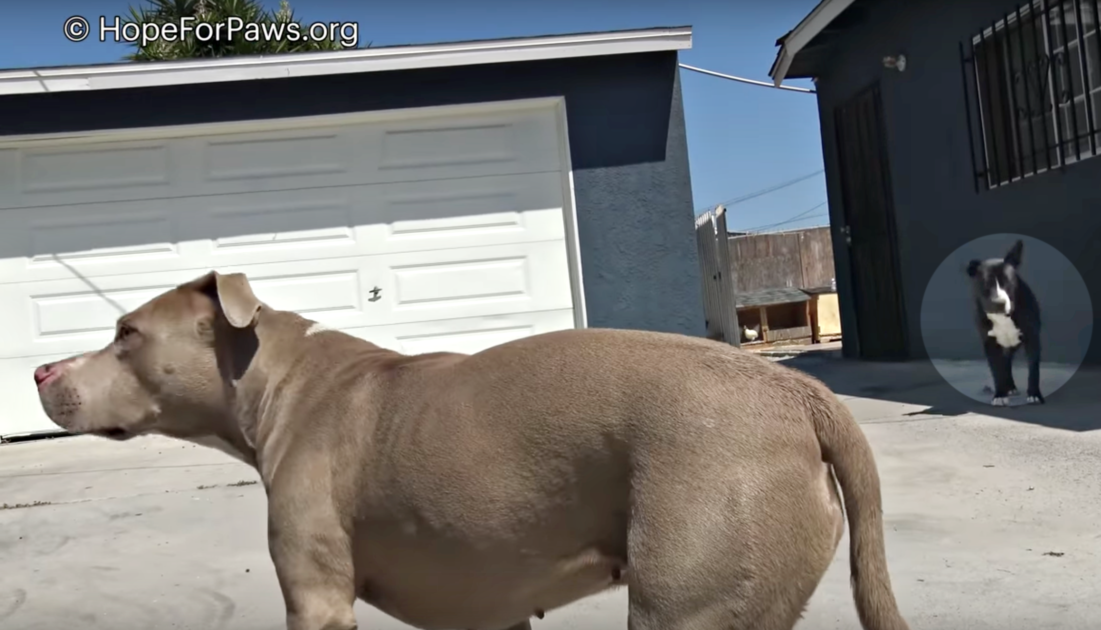 The kind man begins to cry. “I feel so horrible. I gained his trust and now I’m backstabbing him.” He pets his head and continues, “I’m sorry, bro. I’m so sorry, okay?” It really is quite a heartwarming and heartbreaking scene. He knows the two dogs will go onto a better life but he’s so conflicted parting with them. He loves them dearly and has fed them and loved them up as much as he could.

While George and Irene lived on the street, neighborhood kids threw rocks at them and called them names. It wasn’t a way for any dog to live. The kind man knows, it just breaks his heart to see them go.

The rescuers take both dogs to the vehicle. Irene is George’s emotional support. She stays beside him. Inside the car, George is crated and Irene lays right outside his crate, guarding her favorite friend. Irene is all smiles. She knows she’s headed towards a better life and has her best friend with her to celebrate. 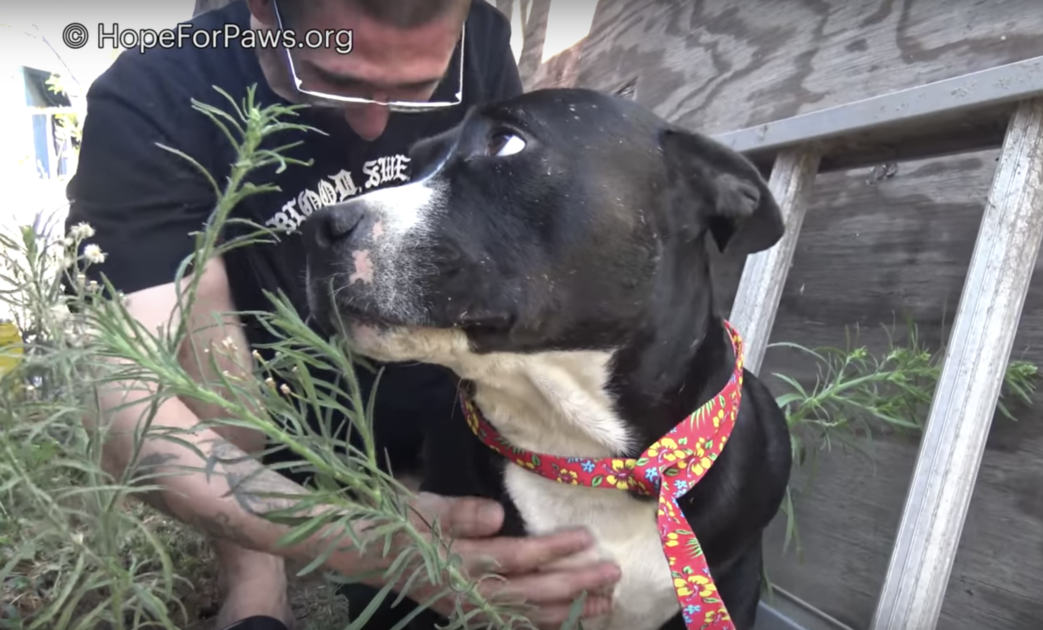 Back at the rescue center, the dogs enjoy a nice bath. Then they get medical exams. The most astonishing thing of all happens: George is diagnosed with bone cancer! Because it was caught when it is, he’s able to have life-saving surgery. That kind man SAVED George’s life! In more ways than one! 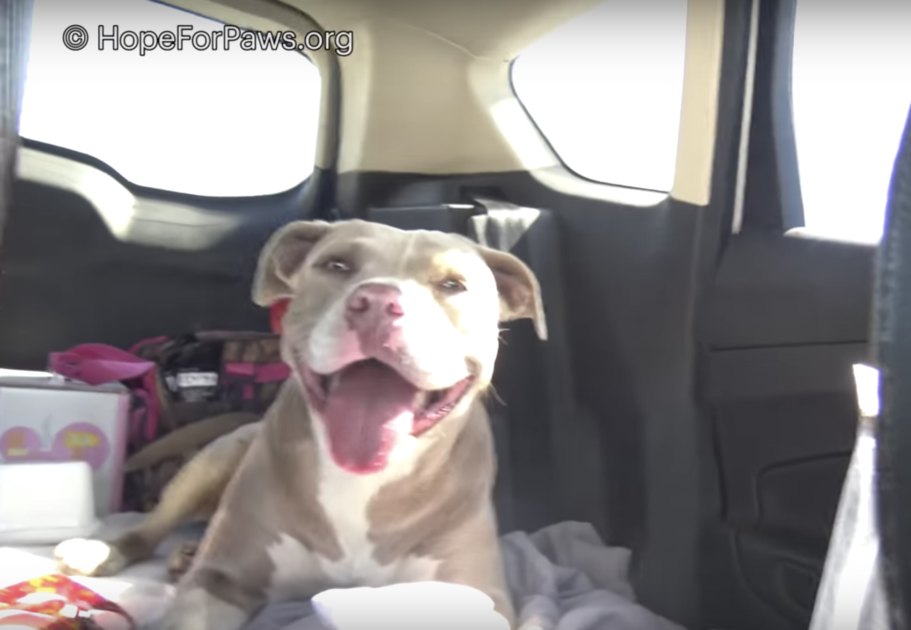 The vet had to amputate one of George’s legs in order for the cancer not to spread, but he will be okay. Dogs do very well on three legs. In fact, some can run faster than dogs on four!

When George is well enough to be released from the medical center, he’s reunited with his girlfriend. When Irene sees George, her tail and happy cries say it all! 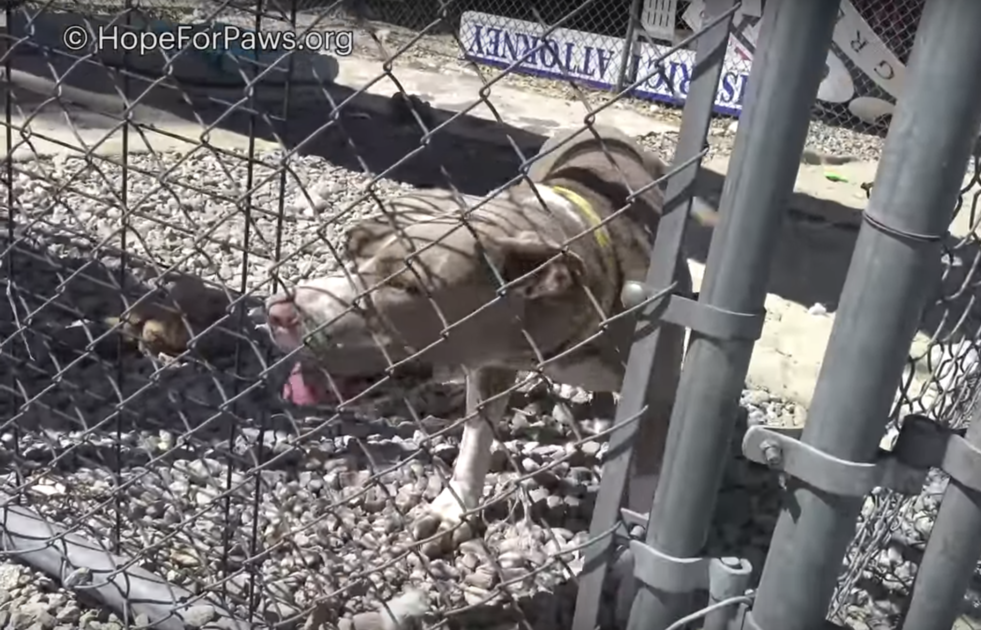 Both pups are getting excellent care. They’re being taught how to be pets rather than ‘street dogs.’ George is starting to warm up to everyone he meets.

He’s beginning to understand that most people are good and it’s okay to trust them.