Andrea Bock was driving through Clam Gulch, Alaska, on Sunday morning when traffic came to a stop.A mama moose and her calf were attempting to cross the highway, but the exhausted calf was struggling to get over the guardrail. Separated from her calf, the moose was getting anxious — and traffic was piling up on the busy road.

Moose calf rescued from side of highway

“I think the reason the mother kept bringing him back to the center was because it was the section where there were no cars.”Joe Tate was also stuck in his car on his way home from a fishing trip with his friends. He, too, watched the drama unfolding and decided to take action to reunite the family.
Bock couldn’t believe what she was seeing. 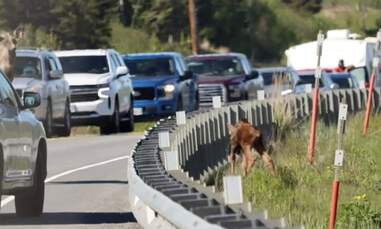 Man picks up moose calf to reunite him with mother

“After nearly 30 minutes of frantic pacing back and forth and the line of traffic growing more and more by the minute, a gentleman from the northbound lane of traffic came and gave the calf some assistance,” Bock said. “He waited for the right moment in time when the mom was on the other side of the highway. Traffic blocked her view as he quickly grabbed the calf and placed him over the guardrail with his mother.” 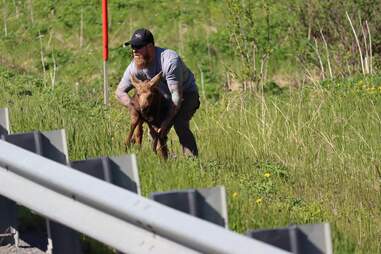 A stressed moose can be very dangerous to humans, especially when they’re with their young. If a mother moose feels threatened, she may charge, stomp or kick to protect her babies — so it’s best to maintain a safe distance. While it is never a good idea to interfere with wildlife, this situation called for fast action. 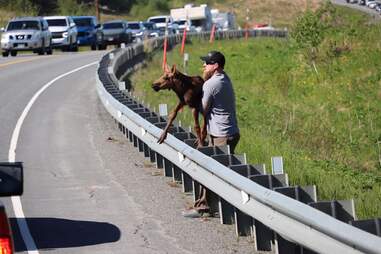 Luckily, Tate and his friends had devised a plan to distract the mom by driving a trailer in front of her.

“At the time, I didn’t know the friends had devised a plan to block the view of the mother, so I was nervous for the guy,” Bock said. “I thought he was just hoping the mom would stay out of sight long enough for him to grab her baby.” 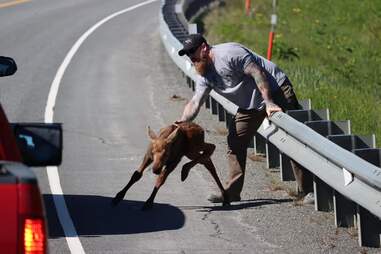 When Tate approached the calf, the little animal was grateful for the help. “The calf looked so tired he practically walked into his arms,” Bock said. “It was pretty cool.”

Thanks to Tate, the calf returned to his mother and the little family crossed the road to safety. “It could have gone bad and I understand and know that,” Tate told KTUU. “But it did go for the best, and it was worth the risk that I took.”