Nothing comes between one Florida man and his dog — not even an alligator.

Trent Tweddale says he was walking his dog, Loki, on Monday morning on his farm in Pasco County, Fla., where the river had swelled after recent torrential rains.

As the six-year-old rescue dog was walking through the water, Tweddale says, a 13-foot alligator attacked him.

“It all happened so fast,” he told Patch, a California-based online publication. “It seemed like a million years and a second all at the same time.”

Tweddale, a 32-year-old former Army staff sergeant, did what any dog lover would do: he punched the alligator in the face.

“I grabbed the dog’s collar to try to pull him back and I ended up in a tug-of-war match with this gator, and the gator was not letting go,” he said. “So I let go of the collar, and I got about knee-deep into the water and started pounding on the gator’s head until he eventually let go.” 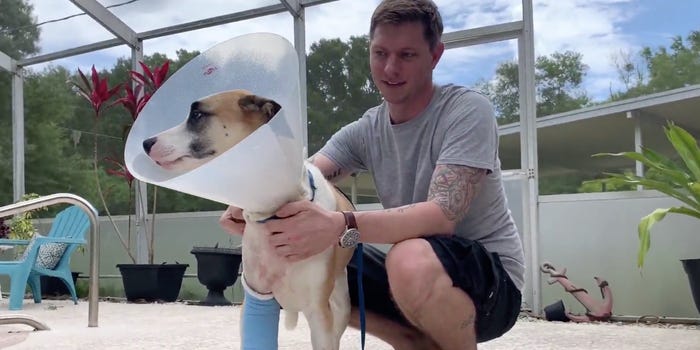 In the middle of all this, he called his wife, Kristina Deak, to come help.

“I’ll never forget running outside to (his) screams and holding Loki’s shredded, broken leg together to stop the bleeding,” she wrote in a Facebook post about the encounter.

“I thought for sure Loki would die in my arms before we made it (to the vet’s).”

The former Army staff sergeant was left without a scrape, but Loki wasn’t so lucky.

“When I pulled him back up, the bones were out and it looks like the arm was just hanging by a shred,” he explained.