Thanks to a few rescuers humane enough to dedicate themselves to saving lost animals, a pit bull that spent over a year in exile alone is now safe and sound. The poor pit bull survived as a one-man army in a deserted orchard in rural California.

The pit bull, Mama, made roaming through the farmlands outside Ducor her main job for months before she was rescued. Unknown to her, she lingered in a few dedicated rescuers’ minds who set out on a mission to save her. The rescuers gave the pit bull food and water, but they could never catch her when they were out in the orchard. 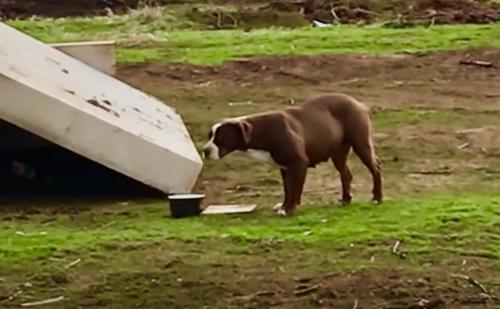 One Dany Spanks who works at the Safefurr Place Rescue noticed Mama had been living all alone for months. He immediately embarked on a mission to rescue her, using a tender procedure that would first involve winning Mama’s trust. For four months, Dany patiently treated Mama right, visited her, and gave her food and water as a way to get to her without resistance. He posted Mama’s progress on the Safefurr Place Rescue Youtube channel. 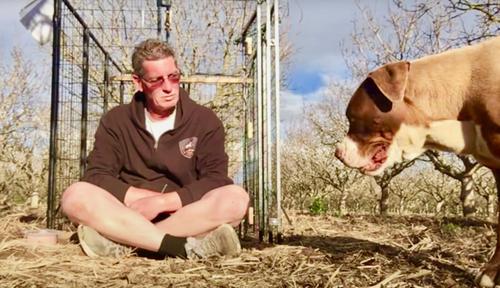 In April 2019, Mama made her first appearance on social media. The lonely pit bull spent her nights alone under solar panels and spent her days along the road waiting for Good Samaritans to feed her. She lived by luck. Probably due to the isolation, Mama would always run off whenever a stranger approached to tend to her. Around December 2019, Dany Spanks noticed Mama and her habits and decided it was time for a change. He began the mission to save the pit bull and bring her closer to reality and humanity. 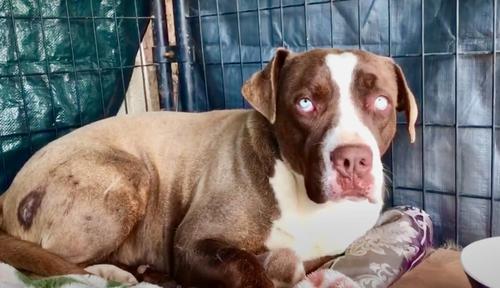 As Dany Spanks says in the channel’s rescue video, he would leave food and water for Mama at a favorable spot daily, hoping that it would keep her strong and going. With time, Mama noticed Dany’s efforts and gradually built trust in him such that she could always follow him for food. Soon, this would become a daily habit for the duo. The pit bull now fully aware of Dany’s selfless actions and efforts; she made it a daily habit to wait for her savior daily, at the same spot and around the same time. 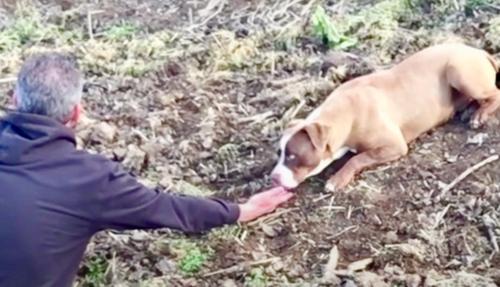 Mama even warmed up to the sight of Dany. Every time she saw Dany approaching, Mama would playfully run after him because she knew Dany had some nice goodies for her. Dany would bring Mama her favorite hot dogs. Although they had grown a bit closer, Mama didn’t fully open up to Dany. She played with him but never allowed him to pet her.

Three months into the same habit, Dany’s team received a video filmed about fourteen months earlier that revealed a story Mama couldn’t narrate. It explained so much about Mama’s isolation and retractive behavior.

According to the new information, Mama was unfortunate to get abandoned in January 2019. She got lost at a gas station located five miles away from the orchard. As Safefurr Place Rescue comment in the video, iIt was clear she had recently given birth to a litter of pups and had been cruelly dumped.”

It must have been the trauma that forced Mama into isolation. Getting a leash around Mama seemed like an impossible mission in which Dany Spanks came up with the idea of first building trust with the pit bull. With time, Mama warmed up to Dany’s plans and tricks and eventually gave up her stray life on March 27, 2020. It must have been the longest 15 months for Mama.

Today, Mama lives with her new friend, Dany. Dany says she isn’t available for adoption, at least until it is thoroughly evaluated if she’s fit for a new environment. In the meantime, Dany is confident that Mama is safe under his wings.