Late one afternoon, photographer Joe Neely and his wife were out for stroll with their cameras. They’d hoped to take photos of wildflowers blooming near their home in Arizona.But they ended up capturing something even more beautiful. 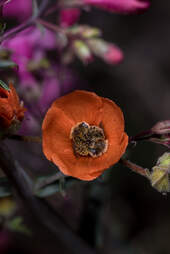 After stopping by a grove of orange globe mallow flowers, the couple realized they weren’t alone. In just about every bloom, a bee was going about his business — but without their usual vigor.
Turns out, the bees were tired. This was the end of their workday.

“We joked that they looked pollen drunk as they stumbled about,” Neely told The Dodo. “Soon after, all the flowers on the plant had a motionless occupant in them. They were sleeping.”It was a sweet sight. But then something even sweeter happened. 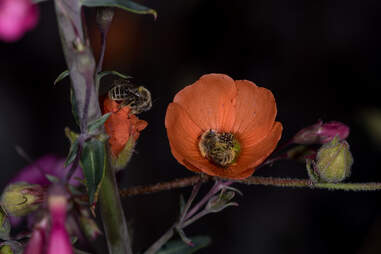 “As sunset grew darker, one last bee was trying hard to find his own flower, but they were all taken,” Neely said. “So he crawled into this flower with this other bee, who shifted a little to give him room.”
The two sleepy bees then proceeded to cuddle, sharing that single flower.“They were very adorable,” Neely said.

Neely quietly photographed the snuggling bees before he and his wife left them to enjoy their rest. It’s now among his most well-liked photos.
Later on, Neely came to learn that the pale-eyed insects are called globe mallow bees, named after these very blooms. While some bee species dutifully return to their hives at nightfall, these bees often sleep within the flowers they love most.