Keeping a wild animal as a domestic animal requires a lot of guts and forgets about the risk factor involved in it. We know wild animals, they are aggressive by nature. It is their natural instinct to be free. But some people are ready to overcome all obstacles just to have a wild animal as a pet.Here is one Russian couple who is the proud parent of a big cat, puma.

They share their tiny apartment with this large and unusual companion. This Puma is named after the famous soccer player, Messi.The Russian Couple, Mariya and Aleksandr Dmitriev had first seen the puma at the Saransk Zoo in Penza. At that time, he was only eight months old. When he was only three months old he was sold to the Saransk Zoo and in the zoo, Messi suffered from health issues.

The moment the Russian couple saw Messi, they fell in love with him. So they decided to adopt him and asked the zoo if they could sell him to them. According to wife Mariya, Aleksandr, her husband had always dreamed of having a big cat at home. But he thought of having a lynx, not a puma. She felt that having that puma was part of their destiny.

Mariya said that they spent full three days thinking whether it was morally good to have puma and whether it was common sense to have one. But they were determined and went to the zoo to negotiate with zoo authorities to buy Messi and they themselves were surprised when they agreed. 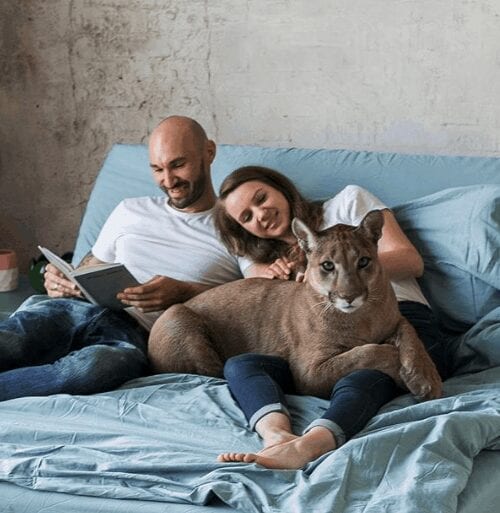 After bringing him home, the biggest challenge was to look after a puma as it was a wild animal. Moreover, he needed medical attention also. At that, he was very weak and demanded a lot of attention.

As it was difficult to find a wild animal handler, the couple found a dog training school. Puma convinced his parents with his behavior that he was a full member of their family and he would not do anything bad apart from some small naughty things. He was very kind and got along with people very easily.