The koala is a much-loved species and lucrative tourism drawcard. Yet, for all its popularity, koalas are forecast to be extinct in NSW within 30 years.Understanding the koala-human relationship might go some way to saving the species. My research examined the dynamic by tracing the representation of koalas in natural history books, children’s stories, postcards and tourism brochures.

I found that “anthropomorpism” – attributing human qualities to a non-human animal – has helped shift attitudes towards the koala away from the scientific and economic to a more romantic, emotional view. In particular, koalas share physical characteristics with human babies, which further endears them to us.

Anthropomorphism can trigger positive emotions in humans which helps with conservation actions. Ultimately, however, threats to koalas are the result of political decisions in which sentiment plays little part. 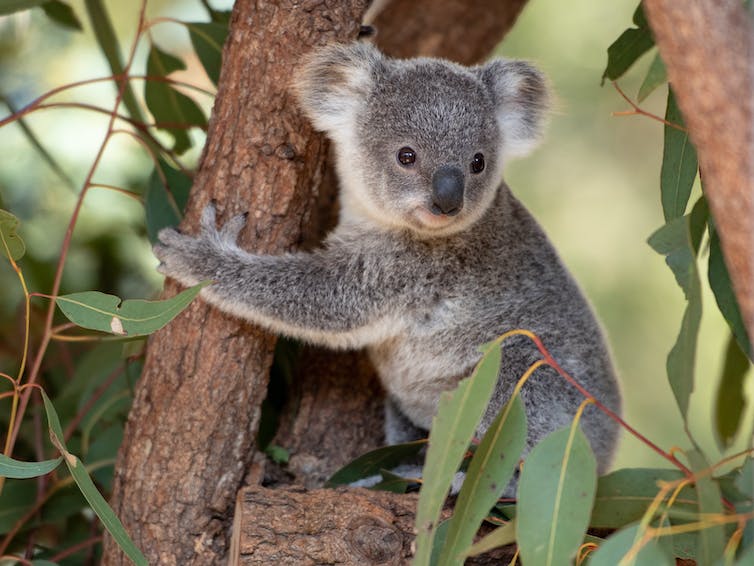 Seeing ourselves in koalas
When humans see themselves in other animals, this can engender greater empathy and concern for the species. And the koala, with its human baby-like qualities can be readily anthropomorphised.

a prominent forehead with eyes positioned below the centre of the head
rounded head and body
soft elasticity of the body surface
a vertical posture.
Newspaper articles published in the first half of the 20th century often infantilised koalas. For instance, an article in the Glen Innes Examiner refers to koalas as “little bears” that sit “up like babies in the trees”.

Koalas even make a crying sound when hurt or upset, adding to their baby-like qualities.