There are many beautiful things in this world but there is nothing quite like the sight of a wild mustang running free. It’s something that far too few people get to experience in real life. For those who run a horse sanctuary that focuses on rescuing those mustangs, it is not only a common sight but also a place where magical things happen.

When a picture appeared on American Wildhorse Campaign, it caught the attention of Clare Staples, the founder and president of Skydog Sanctuary. The pictures showed Phoenix, a wild mustang, trying to jump out of a catch pen while his girlfriend, Ghost, was watching on.Phoenix was able to get out of the pen that day but he wasn’t willing to go very far. He came back to keep an eye on his family.

Staples said that it is not out of the ordinary for wild mustangs to form such a strong bond with their families. Within a few days, Staples had located Phoenix and was planning on rescuing him. It wasn’t to put him in a pen, it was to provide him freedom. Skydog Sanctuary is more than a place where wild horses can be rescued and rehabilitated, they also release them back into the wild.

The Skydog Sanctuary website spoke about how Staples went to the location where Ghost and Phoenix were being held. After trying to adopt the family, they hit a wall, but they were told that Phoenix and a male companion were being released into the wild.

When Staples went to visit on a regular basis, Phoenix was there but Ghost was gone. She thought that the horse had probably been adopted, but a year later, she learned that plans had changed and the stallions were not going to be released. 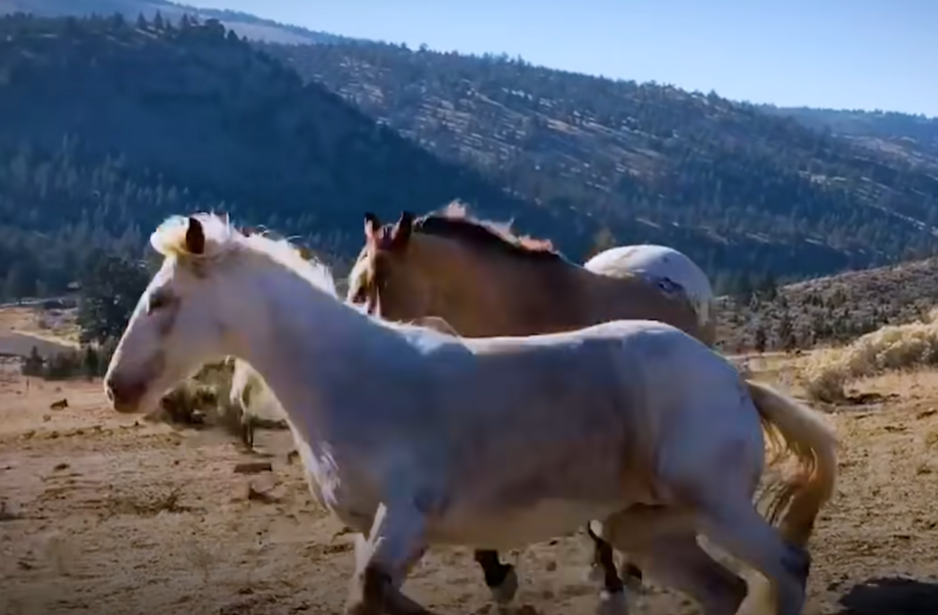 At that point, she applied to adopt Phoenix so she could “give him back the freedom he so desperately wanted the day of his capture.” When the adoption went through, Phoenix went to Oregon to the Skydog Ranch and he made new friends.

Although Phoenix seemed at home in his new location, they could tell that he was missing Ghost. Staples did not give up the search but came up empty-handed until something changed after about two years.

She said: “To my amazement, almost two years after the roundup I spotted Ghost on the Internet Adoption and immediately bid on her to reunite her with Phoenix.” They won the bid, and within weeks, Ghost was reunited with Phoenix. You can see the moment that it happened in this video:

They are also happy that Ghost and Phoenix are back together again. It seems as if it has really lifted the spirits of Phoenix as well, and they are now spending their days together and are inseparable.

A number of wild horse families spend their time at Skydog Sanctuary and have gotten their second chance at being together after roundups. They say that many aspects of the mustang issue are represented in the horses they have. Many of those animals lack basic care and affection due to slipping through the cracks.

Perhaps Staples said it best when she said: “All the wild horses and burros here are treated with the utmost kindness and respect and we leave in peace the ones who want to be left alone and give others the love and compassion that they have not experienced from people before.”