McDonald’s is being sued by a Russian woman after an advert showing their cheeseburgers allegedly made her break her fast during Lent.

Ksenia Ovchinnikova, an Orthodox Christian from Omsk, Russia, claims that seeing McDonald’s adverts made her break her fast for Lent in 2019. At the time, she was attempting to stay away from meat and other animal products.

For Orthodox Christians following the Julian calendar, Lent is a strict period as they are expected to stay away from meat, meat by-products, poultry, eggs, and dairy for the entire period.

Ovchinnikova claims that she hadn’t eaten meat in a month when the fast-food chain’s adverts for burgers and nuggets made her break her fast in April 2019.

Ovchinnikova is now accusing the fast-food giant of breaking the consumer protection law and insulting her religious feelings. She blames the company for advertising meat and animal products at a time when Christians are refraining from them, and is requesting 1,000 rubles ($14) as compensation for sustained moral damage.

Despite successfully fasting for the past 16 years, Ovchinnikova was not able to resist the adverts and ended up ordering a burger from the nearest McDonald’s restaurant. 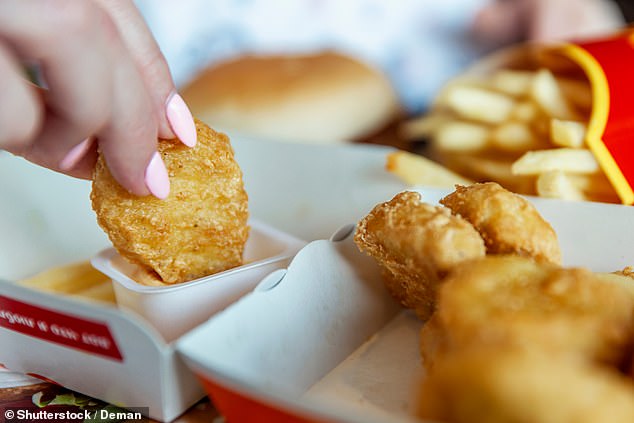 Ovchinnikova is blaming the restaurant’s advertising campaigns for her moment of weakness. Above, McDonald’s chicken nuggets

‘By this point, I had already been fasting for a month, but when I saw an advertising banner, I could not help myself, I visited McDonald’s and bought a cheeseburger,’ Ksenia Ovchinnikova wrote in her statement.

‘In the actions of McDonald’s, I see a violation of the consumer protection law. I ask the court to investigate and, if a violation has taken place, to oblige McDonald’s LLC to compensate me for moral damage in the amount of one thousand rubles.’

The date of the preliminary hearing on Ovchinnikova’s claim has not yet been set, court sources told Zamoskvoretsky press service, reported Oddity Central.