Last summer, Sue Rogers got a call asking if she could take in an abandoned baby bird. A construction crew had found a nest while working on a parking ramp and, after they moved it, the mother never returned.

Rogers, the founder of The Mia Foundation, agreed to take in the little orphaned mourning dove. She thought the dove, whom she named Lovey, would only be with her for a few weeks until the little bird learned to eat and fly. But whenever Rogers tried to release Lovey back into the wild, she would find the bird back on her deck a few hours later. 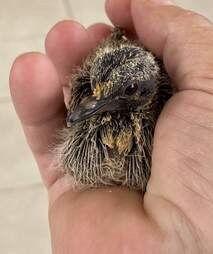 As fall approached, Rogers moved Lovey back inside the house to protect her from the cold. Lovey has free rein of Rogers’ home and can fly wherever she pleases. But she never seemed interested in the other animals there — until a tiny puppy named Alfie showed up.

“Alfie is 8 weeks old, but he’s the size of a newborn,” Rogers told The Dodo. “He has a cleft palate, I’m 99 percent sure he has hydrocephalus (which is water on the brain), and possibly a heart condition as well.”

As Alfie grew stronger under Rogers’ care, he became adventurous — but weighing only 15 ounces, he’s just too small to play with any of the other dogs in the house.

“He needed to start to get socialized, so I let him run around the house a little bit, supervised, throughout the day,” Rogers said. “But he has to be watched very carefully.”

Perhaps Lovey recognized another little orphan in need of a friend because the bird quickly took a liking to Alfie. 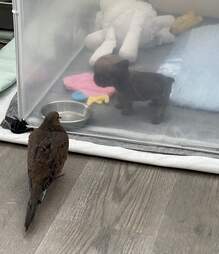 Alfie seems grateful for the company and Rogers couldn’t be happier to watch this adorable friendship blossom between the two smallest animals in her house.